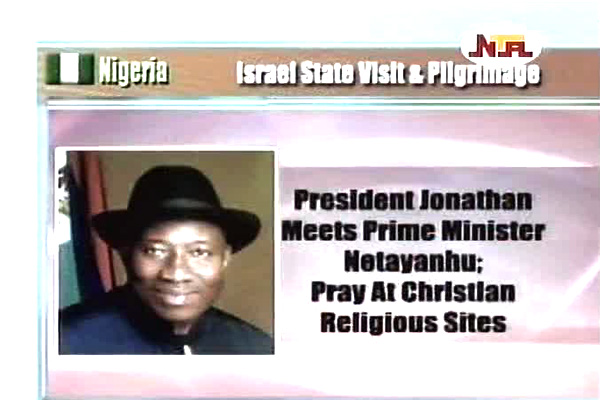 President Jonathan will on Wednesday embark on pilgrimage to Israel. While in Israel, the President is also scheduled to hold talks with the Israeli President Shimon Peres, Prime Minister Benjamin Netayanhu and members of the Israeli Parliament, the Keneset. A statement by Presidential spokesman, Reuben Abati indicates that talks between President Jonathan delegation and Israeli government officials are expected to focus on the enhancement of bilateral relations between Nigeria and Israel in areas of trade, economic development, infrastructure, transportation, agriculture, communications, culture, education and tourism. The President is also scheduled to meet with the President of the Palestinian National Authority, Mr. Mahmoud Abbas. President Jonathan will be accompanied on the trip by Senator Emmanuel Paulker, the Ministers of Agriculture, Water Resources, Works and the Minister of State (Foreign Affairs), and National Security Adviser, Col. Sambo Dasuki. President Jonathan will undertake a tour of some historical sites in Israel revered by Christians and may meet and interact with some other Nigerians who are already on pilgrimage to Israel. The statement debunked certain media reports that he is leading 19 state Governors and about 30,000 Nigeria as his visit coincide with pilgrimage by some Nigerians to sites associated with the earthly mission of Jesus Christ. President Jonathan is expected back in Abuja early next week.