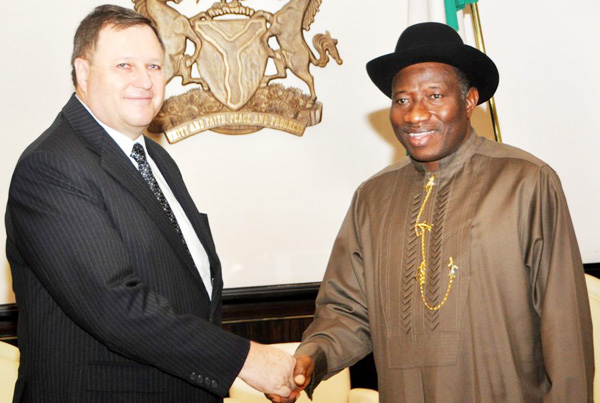 President Goodluck Jonathan has reaffirmed his administration’s determination to do all within it’s powers to facilitate and encourage the rapid diversification of Nigeria’s economy. Speaking at an audience with the outgoing Ambassador of the Czech Republic to Nigeria, Mr. Jaroslav Siro, President Jonathan stated that his administration was fully committed to moving the Nigerian economy away from dependence on crude oil exports by promoting the development of the Country’s non-oil sectors.

The President said in keeping with this commitment, the Federal Government actively exploring all avenues of boosting trade and economic relations with other Countries in areas not relate to the oil and gas sector. He said with the current development in the World, Nigeria is more interested in diversifying the economy, not in over emphasizing oil and gas export.

The President also said his administration is committed to boosting non-oil trade relations with other Nations. He commended Mr. Siro who served in Nigeria for over five years for his efforts to enhance bilateral relations between Nigeria and the Czech Republic which resulted in the tripling of volume of trade between the two countries.

Although, the Czech Republic does not import crude oil from Nigeria, the annual volume of non-oil trade between the two countries currently stands at about $100 million US Dollars. Mr. Siro told President Jonathan that a Memorandum of Understanding aimed at the further strengthening of trade and economic cooperation between the Czech Republic and Nigeria is currently being finalized.

He said that his Country’s Minister of TRade will visit Nigeria soon to sight the Memorandum of Understanding and attend a meeting of the Nigeria-Czech Republic Bi-National Commission.