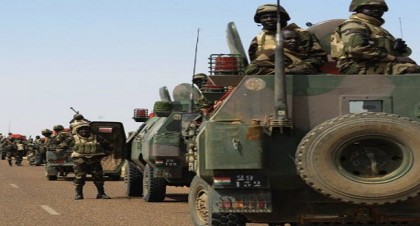 President Muhammadu Buhari Thursday in N’djamena called on member-countries of the Lake Chad Commission to redouble their efforts to intensify the operations of the Multi-National Joint Task Force (MNJTF) established to tackle the Boko Haram insurgency.

Speaking at bilateral talks between Nigeria and Chad, President Buhari noted that the security of Nigeria and her neighbours were intrinsically linked, adding that this makes it very essential that they cooperate on security issues in a robust and sustained manner.

The President said that he was quite certain that when it becomes fully deployed and functional, the MNJTF, which comprises Nigeria, Chad, Niger and Cameroon will be able to secure and stabilize all the areas affected by the Boko Haram insurgency.

President Buhari also reaffirmed his conviction that with greater cooperation among Nigeria and neighbouring countries, the Boko Haram insurgency will be brought to an end very soon.

His remarks came on the heels of Wednesday’s appointment of Major-General Tukur Buratai of Nigeria as the Force Commander of the reorganised MNJTF, which also has Benin Republic as honorary member.

The President thanked Chad for her invaluable support in the fight against insurgency and terrorism.
“Your troops have stood shoulder to shoulder and fought gallantly with ours in the fight against the forces of evil.
“This is a remarkable show of good neighbourliness, which we must reinforce in the years ahead,’’ he told President Idriss Deby Itno.

President Buhari, who is on his first visit to Chad, after assuming office as President of Nigeria, expressed concern that the insurgency has taken a huge toll on citizens of both countries, many of whom have been forced to flee their homes.

The President said that the harrowing images of displaced citizens of both countries, in search of safety and succour, must spur their governments and others in the sub-region to do more “to restore their dignity and give them the relief they need”.

On the bilateral relations between Nigeria and Chad, President Buhari noted that both countries were bound by “nature’’, adding that they must therefore work together to find lasting solutions to issues of border management, migration and movement of goods and services.

The President, who had earlier thanked President Deby for attending his inauguration ceremony on May 29 in Abuja, said that he would return to Nigeria with the assurance that Nigeria and Chad are poised to intensify their cooperation.

In his remarks, President Deby commended Buhari for his “wise decision’’ to relocate the Nigerian Military Command center from Abuja to Maiduguri.

The Chadian President said that the decision, which was announced in President Buhari’s inaugural address, was a right step towards restoring peace and security to states affected by terrorism, and the sub-region.

He assured President Buhari that Chad will continue to work with Nigeria to achieve lasting peace and security in the sub-region, given their historic, cultural and economic ties.