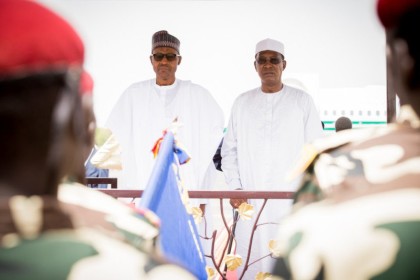 President Muhammadu Buhari and his Chadian counterpart, President Idriss Deby Itno, Thursday in N’Djamena reaffirmed the commitment of their countries to greater cooperation in the fight against Boko Haram.

According to a communiqué issued at the end of President Buhari’s one-day official visit to Chad, both leaders agreed on the need to quickly make the Multi-National Joint Task Force (MNJTF) fully operational to effectively combat terrorism in North-East Nigeria and “everywhere” that Boko Haram operates.

President Buhari and President Deby called on the international community to provide the Lake Chad Basin Commission and neigbouring countries with all necessary support to combat terrorism and insurgency
“Both Heads of State agreed that the war on Boko Haram should be supported by emergency development initiatives in areas affected by this insurgency group.

“This will help to overcome the harmful effects faced by local populations,’’ the communiqué said.
President Buhari paid tribute to the gallantry of Chadian soldiers who have engaged in operations against Boko Haram and condoled the families of their comrades who were killed in action.

While in the Chadian capital, President Buhari also held a closed-door meeting with Major-General Tukur Buratai of Nigeria, who was recently appointed Force Commander of the MNJTF, with headquarters in N’Djamena.