International collaboration to end insurgency in Nigeria in the shortest possible time has received further blessing with the United Kingdom pledging all necessary assistance to the Nigerian Armed Forces. The British Chief of Defence Staff, General Sir Nicholas Houghton reinforced the British pledge when he paid courtesy visit to Nigeria’s Chief of Defence Staff, General Gabriel Olonisakin in his office in Abuja. 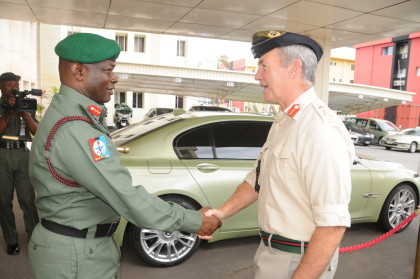 In the report signed by the Acting Director Defence Information, Colonel Rabe Abubakar says, General Houghton noted that the long standing relationship between Nigeria and the United Kingdom and the recent visit of Nigeria’s President to Britain informed his visit to Nigeria to meet with the top military leadership on the urgent areas of collaboration against the threat of Boko Haram insurgency. He said Britain is aware of the efforts Nigeria Armed Forces had put in to subdue insurgency in the North East and militancy in the Niger Delta, noting that the time is ripe for Nigeria allies to render all necessary forms of assistance to reinforce the capability of the Nigerian Armed Forces.

The British CDS pointed out that the successful conduct of the last Nigeria general election that produced Mohammadu Buhari as the President has further put Nigeria on a positive global searchlight in the comity of nations and the Britain is ever ready, more than before, to assist the country in human capacity building and technical aids. He commended the Nigerian Armed Forces for beating back the terrorists in the last couple of months.

Earlier in his welcome address, Nigeria’s Chief of Defence Staff, General Olonisakin, had solicited for training and human capacity development from the United Kingdom. He requested for British assistance in military hardware, essential equipment, platforms and intelligence gathering, not only in the areas of operations in the North East but also in the protection of the nation’s maritime environment and the Gulf of Guinea.

General Olonisakin thanked the visiting British CDS and Britain for all the assistance Nigeria and its Armed Forces had enjoyed from the United Kingdom so far and called for more collaboration, especially at this crucial time when Nigeria is battling against all forms of crimes and illegalities within the nation’s territory.

Present at the occasion were representatives of the Service Chiefs, Principal Staff Officers of the Defence Headquarters, UK Defence Attaché to Nigeria and other senior military officers.