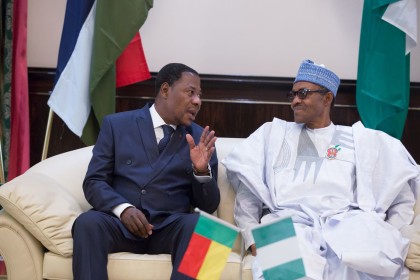 President Muhammadu Buhari Tuesday commended the efforts made so far by the outgoing President of Benin Republic, Boni Yayi and the Beninoise National Electoral Commission to ensure a peaceful and transparent Presidential Election in the country next year.
Receiving the Beninoise President at the State House, President Buhari commended the visionary leadership that Yayi had provided for his country for close to ten years, urging him to complete the legacy of patriotism and statesmanship by ensuring a peaceful hand-over of power.
“Whatever happens in Benin is of particular interest to Nigeria because we are very good neighbours.  I will like to congratulate the President of Benin for successfully completing two terms in office, and his plan to hand over power after the elections in February,’’ the President said.
According to the President, Nigeria will need more support from neigbhouring countries in fighting the scourge of terrorism and illegal activities in the Gulf of Guinea that currently undermine the West African economy.
On energy and gas supply to West African countries, the President said discussions were still ongoing among the technical experts from various countries.
In his remarks, the Beninoise President promised that he will do his best to ensure a peaceful and transparent presidential election in his country next year.
President Yayi also emphasized that there was a need for more cooperation in West Africa to confront the challenges of security and infrastructure currently faced by the countries in the sub-region