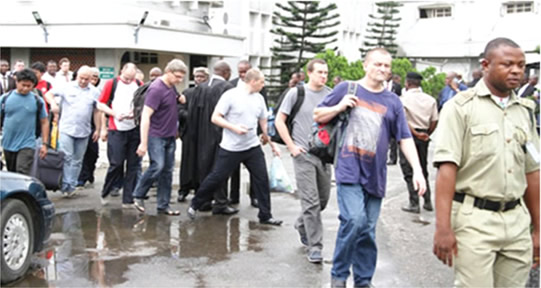 Justice Ibrahim Buba of the Federal High Court, Lagos today December 15, convicted and sentenced nine foreigners alongside their vessel for illegal oil bunkering. The convicts, arraigned by the Economic and Financial Crimes Commission, EFCC, on June 18, 2015 were found guilty on a 4-count charge that bordered on conspiracy and illegal oil bunkering.
The convicts are five Bangladeshi and four Filipinos. They are Axel Joseph Gibo Jabone, MD  Zahirul  Islam, Juanto Camireno Infantado, Suarin Fernando Alave, Gatila Jaypee Gadayan, Islam Shahinul, Islam Rafiqul, Shaikh Shibli Nomany and Rolando Jose Comendador.  The vessel is  MT Asteris.
Justice Buba found the nine persons guilty on a four-count charge and accordingly convicted and sentenced them to five years imprisonment on each of the count. The sentences are to run concurrently.
However,  Justice Buba gave each of the convicts an option of N20 million fine on the four counts.
Justice Buba also ordered that the vessel, MT Asteris and cargo on board be forfeited to the Federal Government of Nigeria.
MT Asteris and the crew members were intercepted by Nigerian Navy Ship Beecroft during a routine operation in the Nigeria waters on March 28, 2015 with 3423.097 Metric Tons of Crude Oil without lawful authority or appropriate license, an offence contrary to Section 1 (19)(6)of the Miscellaneous Offences Act Cap M17, Laws of the Federation  of Nigeria 2004 and punishable under Section 17 of the same Act.
Upon interception, Captain of the vessel claimed that the vessel was not carrying any product but further investigation by the Commission revealed that the vessel was carrying petroleum product without the relevant documents indicating where the product was lifted and its destination.
In a related development, Justice Buba also convicted and sentenced Alakinde Wale and Boniface Onuabuchi to two years imprisonment on a five count charge bordering on conspiracy and dealing in petroleum product without lawful authority. The convicts were said to have in June 2014 conspired among themselves to commit an offence of dealing in premium motor spirit without lawful authority  or appropriate licence.
Justice Buba also gave the convicts an option of N500,000 fine on each of the five count but ordered that the vessel, MV Zahra and the  cargo on board be forfeited to the Federal government of Nigeria.