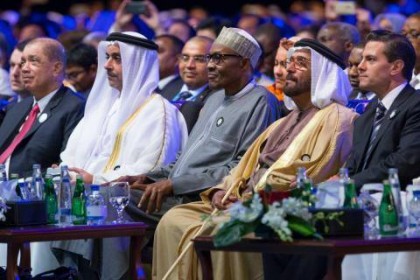 President Muhammadu Buhari Monday in Abu Dhabi called for greater global cooperation against the devastating effects of climate change to avert disaster for the human race in the 21st century.

Addressing the opening of the 2016 World Future Energy Summit, President Buhari reaffirmed Nigeria’s readiness to work with the United Arab Emirates and  rest of the world in a collective effort to  mitigate the effects of climate change.

“Africa is already suffering from the consequences of climate change, which include recurrent drought and floods.  In Nigeria, the drastic drying up of the Lake Chad to just about 10% of its original size, has negatively impacted on the livelihood of millions of people, and contributed in making the region a hot bed of insurgency.

“Desert encroachment in Niger, our northern neighbour and in far northern Nigeria, at the rate of several hundred meters per annum, has impacted on the existence of man, animal and vegetation, threatening to alter the whole ecological balance of the sub-region.

“In the middle and southern part of Nigeria, land erosion threatens farming, forestry, town and village peripheries and in some areas major highways.

“Constant and abrupt alteration between floods and droughts prove that climate change is real and therefore a global approach and cooperation to combat its effects are vital if the human race is not to face disaster in the 21st century,” President Buhari told participants at the summit.

“We  see Abu Dhabi as a dependable partner in the collective effort to manage climate risks including the attainment of the sustainable development goals by 2030.

“Thank you, Abu Dhabi, for consistently continuing to support international action in this sphere.

“We appreciate your immense contributions worth hundreds of millions of dollars in Energy aid to developing countries,” the President said.