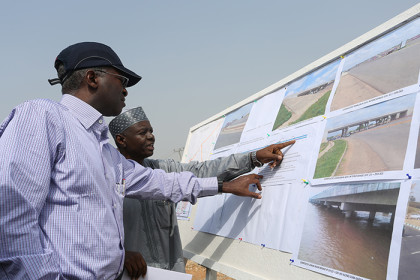 The Honourable Minister of Power, Works and Housing , Mr Babatunde Fashola , SAN has made an appeal that communities and states should take ownership of federal projects in their areas to prevent disputes or acts of sabotage that could be detrimental to the delivery of such projects.

The Minister made the call at the various stops in the course of a nationwide inspection, verification and fact finding tour of projects under his Ministry which began on Monday with an inspection of the various sections of the Abuja –Abaji- Lokoja road, the Geregu I and II Power Plants and the Lokoja 330/132/33 KV Transmitting Sub Station in Kogi
State .

The tour has also seen the Minister visit Benue, Nasarawa and Plateau States in the North Central zone by road throughout the week to see first hand the state of work at several important power , roads, housing and other infrastructure facilities under the Ministry of Power, Works and Housing.

While paying a courtesy visit along with his Minister of State, Hon. Mustapha Baba Shehuri on Monday to the then outgoing Governor of Kogi State, Captain Idris Wada , Fashola explained that the tour was informed by the need to see things for themselves after being briefed in the office and planning a budget . 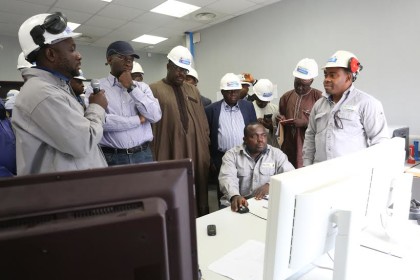 Fashola Minister of PW$H On Tour

“ This is the 80th day since our appointments as Ministers. We have spent the time before now planning a budget , taking briefings , getting to know our staff, getting to know ourselves and this phase of the work now is to go and see for ourselves some of the things we’ve read in files across the States , some of the things we have been told in the meetings and to see things as they stand in preparation for implementation ,” he said.

According to Fashola, a realization of this has informed his decisions since assumption of office. “ So one of the things that we have done first is to ask our Controllers of Works in the various states to start working in partnership with the State Governments. It does not matter what party or what colour of flag is flown by that Government, “ he said.

Enumerating some of the projects already inspected before getting to the state capital, Fashola said the Ministry remains committed to the completion of the Abuja – Abaji- Lokoja road in order to achieve the connectivity of the two cities and the State itself to the Federal Capital Territory as well as facilitate the efficient movement of goods and services.

The Minister spoke further on the rational for the tour and visits which centred on various steps being taken to realize the various aspects of the Ministry’s mandate in collaboration with the states and on which he had earlier written the Governors. 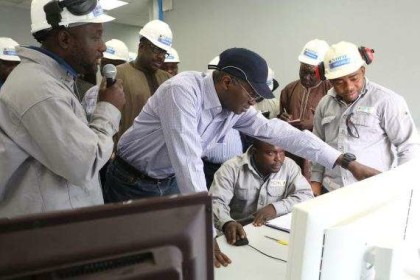 Continuing the Minister declared, “We will need those advisers, commissioners and assistants to be our fronts men in the states. Men and women who will take decisions, who will be accountable to the State Governors, because we are also seeing that quite a number of critical power projects are held up by community issues, disputes, environmental issues, cultural issues, social issues which are best dealt with by the people who are masters of the terrain and usually the Governors are closer to the local people.”

According to the Minister, the Federal Government through the Ministry wants to pay attention to and resolve as many of such issues as possible in order to ensure that important life impacting projects are delivered on time for the benefit of the people.

“We have just resolved some issues in one of the states where the power project has been held by communal and legal issues that was delaying about 700MW of power from being put to completion.

Decrying such negative attitude as people going to damage or sabotage infrastructural facilities located in their communities, the Minister appealed for more community and state ownership of projects in order to check those practices.

The Minister also stated that President Muhammad Buhari has constituted a Committee comprising of some Ministers including Power, Works and Housing, Transportation and Education to review and verify claims made by states with respect to work done on Federal roads in order to enable the Federal Government put a plan in place for refunds.

According to Fashola, the tour would also enable him to see such projects done by states who had put up requests for refunds in the North Central and other zones he would be visiting while the Ministers of Transport, Education and the Minister of State for Power, Works and Housing would also be visiting some of the states in line with the responsibilities for verification allotted in the Committee.

During each of the stops to inspect projects and the subsequent brief courtesy visits to the Governors – Dr Samuel Ortom of Benue State, Alhaji Tanko Al-Makura of Nasarawa State and Hon. Simon Lalong of Plateau State-, the Minister used the opportunity to address key issues affecting Federal Government projects in the states and observations made in the course of the tour such as the habit of leaving lights on in broad daylight observed in some of the rural communities.

At the Pankshin 2 X 60 MVA 132/33 KV Sub- Station which has been completed but could not be energized due to the non-completion of the 132 KV line from Jos as a result of community issues revolving around repeated right of way compensation demand, the Minister reiterated his appeal for the cooperation of States and local communities. While noting that the Plateau State Government had stepped in to resolve the issue, Fashola said that communities should avoid standing in the way of their own development as timely delivery of projects would require the cooperation of all stakeholders.

Each of the Governors who received the Minister expressed their delight at his hands on approach in visiting personally to see things for himself while also using the opportunity to acknowledge the Federal Government projects and stating their requests in areas requiring attention as well as enumerating efforts being made to respond to the Minister’s earlier communications and steps aimed at resolving community related issues affecting Federal projects.

The inspection and verification tour on which the Minister is being accompanied by a small team of senior officials in each of the sectors covered by the Ministry continues.