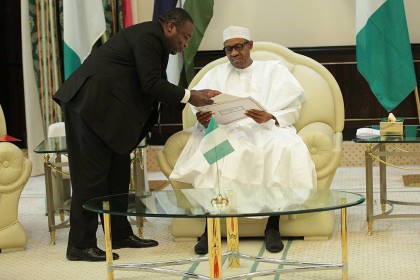 President Muhammadu Buhari says his administration will partner with the eleven-member Economic Community of Central Africa States (ECCAS) to rid Nigeria and her neighbours of the menace of Boko Haram.

Speaking at the State House Abuja Friday while receiving a message from President Obiang Nguema Mbasogo of Equatorial Guinea, President Buhari said he welcomed the effort to organize a joint meeting between ECCAS and the Economic Community of West African States (ECOWAS) with a view to coordinating their responses to the threat of terrorism in the Lake Chad Basin area.

The President particularly noted the role of President Mbasogo in bringing about the proposed summit and described the effort as very commendable. President Buhari said he was deeply touched by the commitment shown in Nigeria’s security by Equatorial Guinea and gave assurances of his commitment to enhancing security and bilateral relations between the two countries.

The Special Envoy of the Equatorial Guinean President, Mr. Juan Antonio Bibang Nchuchuma who brought the message, said his President was prepared to expand and share security intelligence and information with Nigeria to help in the war against corruption and terrorism. He also requested for a meeting of the security chiefs from both countries.