LEADERS of Nigeria and the Kingdom of Saudi Arabia have expressed commitment to a”stable oil market” and a “rebound of oil price.” 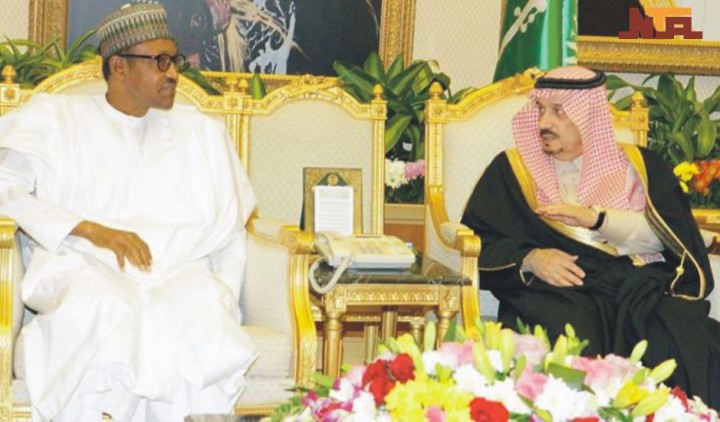 At a bilateral meeting between Nigeria and Saudi Arabia in Riyadh hosted by the ruler King Salman Bin Abdul-Aziz, the two leaders accepted the fact that their two economies are tied to oil and that all cannot be well with both countries when then the world oil market is unstable. They therefore committed themselves to doing all that is possible to stabilize the market and rebound the oil price.

The two leaders who engaged in extensive discussions on regional and global issues also agreed that terrorism posed a common threat to their states and would require close cooperation to prevail over the threats.

President Muhammadu Buhari who was making his first pronouncement on the invitation to join the coalition of Islamic states against terror spearheaded by the Saudis congratulated the Kingdom on its formation.

“Even if we are not a part of it, we support you. I must thank the Kingdom of Saudi Arabia for the recent creation of a coalition to address the menace of international terrorism. Nigeria will support your efforts in keeping peace and stopping the spread of terror in your region. This is in consonance with our own commitment and on-going efforts in seeking to stamp out Boko Haram terrorists from the West African sub-region and Lake Chad Basin Commission (LCBC),” the President said.

Speaking on global terror generally, President Buhari said that “international terrorism made a statement by attacking one of the advanced countries by carrying out an attack on Paris in which 130 were killed. Now we have to come together to find a common solution to the problem of terrorism.”

He thanked the Saudi government for it continuing support to Nigeria in the fight against terrorism.

Turning to the menace that Libya has turned into, President Buhari regretted that the late Libyan leader Muammar Ghaddafi recruited, trained and armed citizens of many states in the Sahel region. With his fall, these mercenaries have returned to their countries, “doing nothing but to shoot and kill.” He cited Burkina Faso and Mali as the main victims but expressed happiness that the countries neighboring the Lake Chad have tightened their ranks to finish off the Boko Haram threat.

“Luckily, we have cultivated our neighbors. We are now working together against Boko Haram,otherwise the problem would have become worse.”

He and King Salman hoped that the Libyan factions will soon see reason to reunite and restore fully their own country so as to save the world from further terrorism spin-offs from that country.

The leaders also focused on trade between their states and agreed to give fresh impetus to the joint commission previously established in order to boost commercial and other activities to unify their peoples.

In his remarks, King Salman commended the progress made by Nigeria in combating terrorism and promised to give further support and assistance.

He welcomed the support of the Nigerian government for the new ant-terrorism coalition and implored the President to consider its full membership.

King Salman pledged his full support and cooperation to Nigeria under its present leadership and directed all agencies of his government to follow up on the discussions.

“I now instruct my team to go and sit down with your relevant agencies to push forward cooperation between our states,” the King concluded by saying.