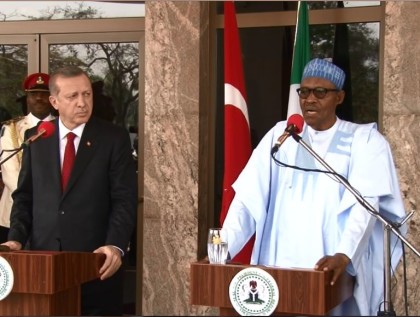 President Tayyip Erdogan of Turkey on Tuesday in Abuja said his country would assist and partner with Nigeria in the ongoing fight against terrorism.

Erdogan made this promise at a joint news conference with President Muhammadu Buhari after a closed door bilateral meeting between them.

Erdogan, who spoke through an interpreter, said Turkey’s support for Nigeria in this regard had become imperative in view of the danger posed by the activities of terrorists across the world

“There is another issue I will like to underline because Turkey also suffers from this particular menace.

“Let me on behalf of myself and on behalf of the Turkey nation extend my condolences to you for the inhuman attacks of January 21 and February 9.

“These acts are yet another evidence of the fact that destructive nature of terrorism is same all over the world.

“As a Muslim, there is something that I see with dismay. Look at Iraq, look at Syria, look at Nigeria and Yemen? Those who kill and those being killed are always shouting of “Allahu Akbar.’’

“This clearly shows that terrorism knows no religion, no nationalities. We should not give opportunity to terrorism to destroy the society.

“We are always ready to cooperate when it comes to combating terrorism’’, he said.

Erdogan expressed optimism that the Memorandum of Understanding (MoU) signed between Nigeria and Turkey would further boost trade and economic relations as well as industrial and military cooperation.

He said Nigeria and Turkey must jointly endeavour to explore and develop the cultural and tourism sectors for the benefit of both countries.

He also stressed the need to strengthen relation between the Turkish and Nigerian Parliaments, saying that it would be useful to quickly establish reciprocal friendship between the two parliaments.

Erdogan, who formally invited Buhari to officially visit Turkey in the shortest possible time, thanked Nigerian government for the warm reception accorded members of his entourage since arriving in Nigeria.

Buhari, who traced the Nigeria-Turkey relations to 16th Century, commended the Turkish government for training members of Nigeria Police and for providing quality security equipment for the combat of terrorism in Nigeria.

He consoled the people and the Government of Turkey over the recent terrorist attacks in the country, which resulted in the death of innocent people with property worth millions of dollars destroyed.

“We thank Turkey very much for the training they are giving to Nigeria Police and quality equipment we received from them.

“We also console each other in terms of terrorist activities of recent.

“With what happened in Libya, a number of people from this Sahel region, who were in the Libyan armed forces of the previous regime, had to return home with no skill other than how to shoot and kill.

“And the developments in Burkina Faso, Mali and North East of Nigeria showed what we have suffered as the result of the collapse of that regime’’, he said.