U.K Parliamentarians Pledges Commitment To Strengthen The Relationship Between United Kingdom And Nigeria 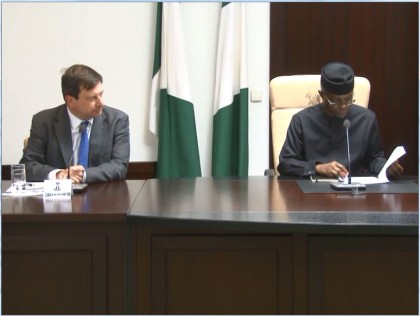 Some British Parliamentarians, on a visit to Nigeria, on Wednesday pledged to strengthen the relationship between the United Kingdom and Nigeria.
The lawmakers gave the pledge while addressing State House Correspondents after paying a courtesy visit to Vice President, Yemi Osinbajo in his office.

The leader of the delegation, Mr Stephen Twig, a member of the Parliament in the United Kingdom, described the meeting as an opportunity to create a fair and more equal society in both countries.

“I am leading a delegation of British members of Parliament this week.
“It is a privilege today to meet the Vice President to talk about the very important partnership between the United Kingdom and Nigeria.
“And how our Department for International Development (DFID) can support Nigeria in creating jobs for the future, in creating a fair and more equal society in the future as well.“

He said that the Vice President took questions on extremely wide range of issues and gave the legislators full and well informed answers especially in the area of education and opportunities for children and people in future Nigeria.

He also said that Osinbajo responded to questions about malaria prevention.

Twig described the dialogue with the Vice President as a very important part of the lawmakers’ visit to the country. According to Twig, the parliamentarians were interested in offering the assistance to Nigeria because of the long standing relationship between the UK and Nigeria.

“There is of cause a large Nigerian diaspora in the United Kingdom. They are very important part of the British public and they speak up for Nigeria.
“The group of members of parliament that are here work particularly on international development issues and our DFID has a very strong presence in Nigeria, works in partnership with the federal government and the state governments as well’’, he added.