The Chief of South African National Defence Force, General Zakaria Shoke has re-affirmed his country’s willingness to work with Nigerian Armed Forces to the benefit of the two countries. 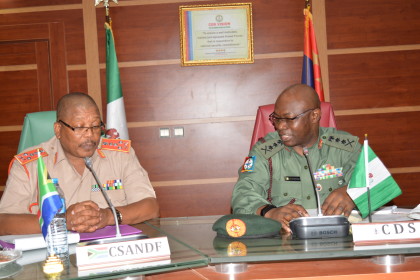 General Shoke made this known when he visited the Chief of Defence Staff, General Gabriel Olonisakin in his office in Abuja.

The Chief of South African National Defence Force promised to support Nigeria in its quest to end Boko Haram in the country. General Shoke further maintained his Armed Forces commitment to the development of the Nigerian military in the area of capacity building, exchange programme and logistics support, among others. He said Nigeria is very important to South Africa, hence the need to working together for the benefit of both countries, especially now when Nigeria is fighting Boko Haram. 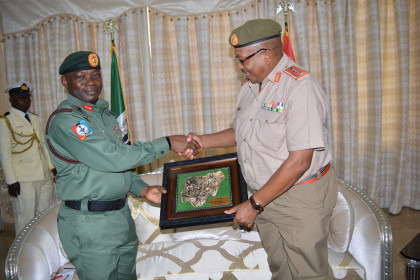 While responding, the Chief of Defence Staff, General Olonisakin thanked the South African Chief of National Defence Force for the visit and solicited for more cooperation in defence related matters. This, he said would go a long way in strengthening the two countries bilateral cooperation.

General Olonisakin also requested for training of more Special Forces and other equipment that could be used in the operations against Boko Haram which has been substantially decimated and degraded. He said the war against terror is closing up and would soon end. 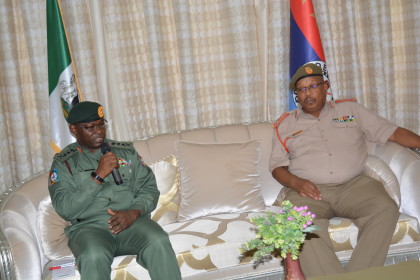 The occasion also witnessed briefing from the 3 Services of the Nigerian Armed Forces who stated the need for logistics and training support to further terminate the war against Boko Haram soon.