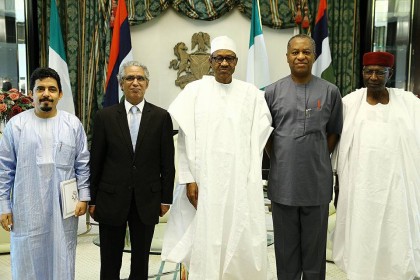 President Muhammadu Buhari says Nigeria will stand with the Sahrawi Arab Democratic Republic (SADR) in line with several resolutions of the African Union (AU) on the right of the Sahrawi people to self-determination and independence.

Receiving Mohammed Salem Ould Salek, Minister of Foreign Affairs of SADR in State House, Abuja, on Friday President Buhari assured him that outstanding issues on self-determination for the country would be scrupulously attended to.

“The issue first came up when I was in office as military head of state. After I left government, Nigeria remained steadfast on it.

“In my maiden outing at the UN General Assembly last September, the issue of Sahrawi was in my speech. You have no cause to doubt our commitment. We stand with our African Union colleagues on this issue.

“Nigeria will maintain focus till everything is finally resolved positively,” President Buhari told Salek, who visited Abuja as Special Envoy of President Mohammed Abdelaziz of SADR.
Salek said his country would never forget the role Nigeria and its then military head of state, General Muhammadu Buhari played in recognizing his country in 1984, when it sought self-determination from Morocco.

“It paved the way for the UN to adopt several key resolutions on Western Sahara, elaborating a peace plan. History is now repeating itself, as you are the President of Nigeria at a time the Sahrawi issue is being put on the front burner again.’’
The Special Envoy told the President that his country needed a special push from Nigeria again, as it received in 1984, “to accelerate matters”.

He stressed that Nigeria helped a lot of African countries achieve independence, noting that SADR is the only pending matter on the continent.

Since its inception, the SADR has been recognised by over 80 countries around the world, and in 1984 it became a full member of the OAU and is a founding member of the AU.