PDP Senators And Threat To Governance If Saraki… – BMSG 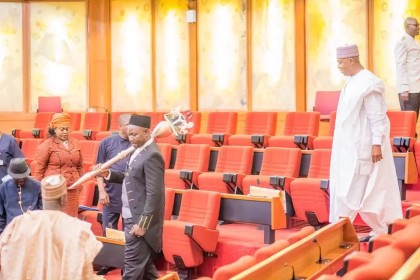 The Buhari Media Support Group condemns in very strong terms the threat by the PDP Caucus in the Senate to make governance difficult for the President Muhammadu Buhari administration if the Senate President Bukola Saraki is removed.

We consider the threat as unbecoming of members of an upper chamber like the Senate.

At a period when the President and his team are working round the clock to fix the country from the rot the PDP administration left it, it is totally unpatriotic for some senators to seek to compound the nation’s problems.

It is on record that one Senator Clifford Ordia representing Edo Central had in a press statement stated that in their support for the embattled Senator Saraki that they will make governance difficult should Senator Saraki be removed.

The President does not have a hand in the trial of Senator Saraki, as all institutions of government are allowed to carry out their responsibilities without let or hindrance.
We there call on the senators to always support the administration in delivering democracy dividends, rather than constituting themselves into obstacles.