President Muhammadu Buhari said Thursday in Abuja that a multinational taskforce will soon be established to patrol the waters of the Gulf of Guinea. 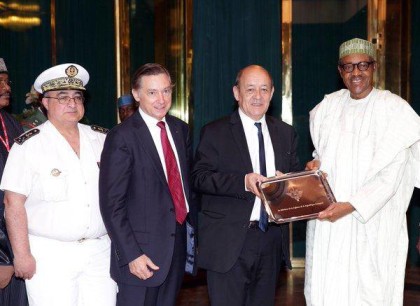 Speaking at an audience with the French Minister of Defence, Mr. Jean-Yves Le Drian, President Buhari said that patrols by the multinational taskforce will augment and boost ongoing efforts to improve security in the Gulf, and curb crude oil theft and piracy.

The President expressed his government’s appreciation of the assistance and support of France and other G7 countries, which he said, has helped Nigeria achieve significant successes against Boko Haram.

“When we got into office in May, last year, Boko Haram was effectively controlling at least 14 local government areas. But now, it is no longer so, and they have resorted to attacking soft targets with Improvised Explosive Devices.

“We are determined to secure all of our territory effectively. We are doing our best and our troops are now operating in the Sambisa Forest,” President Buhari told the French Defence Minister.

The Minister assured President Buhari that France will continue to assist Nigeria to overcome Boko Haram, saying that all terrorists must be seen as common enemies of the free world.