Killer Of The Nigerian Asylum Seeker Arrested In Italy

An Italian football hooligan has been arrested and charged with murder after beating to death a Nigerian asylum seeker who reacted to racial insults against his partner, ANSA news agency reported Thursday. 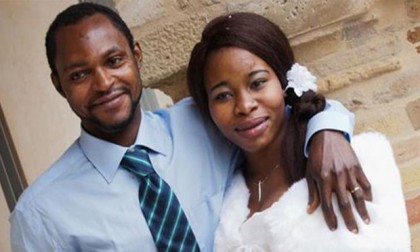 According to the La Repubblica newspaper, Emmanuel Chidi Nnamdi, 36, got into a fight on Tuesday after the man called his 24-year-old girlfriend Chinyere a “monkey.”

He was taken to hospital in a comatose state and declared dead on Wednesday in the central Italian town of Fermo, some 170 kilometres north-east of Rome, near the Adriatic coast.

The accused, Amedeo Mancini, is a supporter of 4th league team Fermana and had been banned from the local stadium because of his violent behaviour, ANSA said.

The incident led Interior Minister Angelino Alfano to travel to Fermo to chair a meeting with local police.

Alfano said it was a “day of infinite sadness,” while Prime Minister Matteo Renzi wrote on Twitter: “Against hatred, racism and violence.”

Comunita di Capodarco, the Catholic charity that was giving shelter to the couple, issued a statement giving a version provided by Chinyere.

She said the man put his hands on her, triggering Nnamdi’s reaction.

“A fight broke out, a street sign was pulled from the pavement, there were heavy blows and one, probably fatal, hit the young Nigerian on the back of the neck. Once on the floor … the young man was hit repeatedly,” the Comunita said.

The couple left Nigeria to flee from the Islamist terrorist group Boko Haram, their hosts said.

Chinyere travelled while pregnant, but fell ill during the sea crossing to Sicily and lost her baby, probably as a result of beatings suffered in Libya, they added.

Father Vinicio Albanesi, who leads the community that sheltered the couple, said the people who attacked the asylum seekers were the same who earlier this year planted bombs in front of four Catholic churches in Fermo.

The explosives did not go off.

“There are small group of people who clearly think they belong to the Aryan race,” Albanesi said, as quoted by Comunita di Capodarco.

“They belong to local football fan groups and I think it is the same clique who has put bombs in front of our churches.”

NEWER POST91 DAYS AT HOME WE ARE TIRED – A Student’s Remarks on Current OAU VC Crisis
OLDER POSTTwo Black Men Killed By Police In The US, One Live footage on The Internet