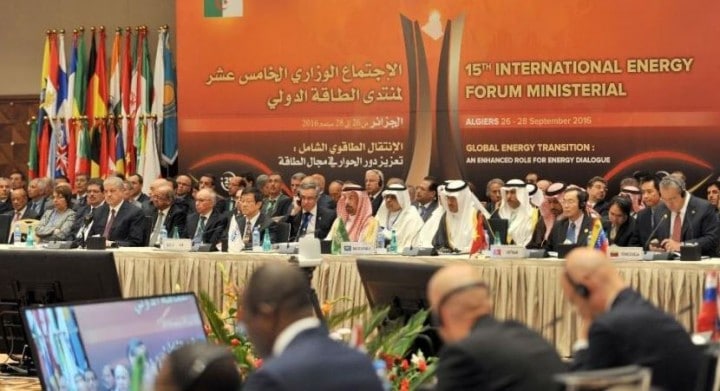 An International Energy Forum has commenced in Algiers on Tuesday.

Representatives of over 50 countries and 82 energy companies converged in the Algerian capital as participate in the forum.

The meeting is expected to discuss stabilising a volatile oil market and developing green energy.

The meeting is to witness four closed-door sessions which are scheduled for Tuesday on the oil market, the liquefied gas market, renewable energies, and energy governance.

It is also expected that the Organization of Petroleum Exporting Countries (OPEC) informal meeting will be held  Wednesday on the sidelines of the IEF 15.

Algerian Energy Minister, Noureddine Bouterfa was optimistic about the meeting: “I’m very optimistic that OPEC members would reach a consensual agreement to restore stability to the up-and-down oil market,” he state this in a press conference preceding the informal meeting of the OPEC in Algiers.

But the optimism was quickly shredded by Saudi Arabia and Iran, who  dashed hopes that OPEC  could clinch an output-limiting deal.

Sources within the exporter group said the differences between the Saudis and Tehran remained too wide.

Saudi Energy Minister Khalid al-Falih said that the meeting is a consultative setting, “We will consult with everyone else, we will hear the views, we will hear the secretariat of OPEC and also hear from consumers,” he said.

Iranian Oil Minister Bijan Zanganeh said: “It is not the time for decision-making.” He said that an agreement would be reached in November, referring to the next formal OPEC meeting in Vienna on November 30th.

Oil prices LCOc1 have more than halved from 2014 levels due to oversupply, prompting OPEC producers and rival Russia to seek a market rebalancing that would boost revenues from oil exports and help their crippled budgets.

The predominant idea since early 2016 among producers has been to agree to freeze output levels, although market watchers have said such a move would fail to reduce unwanted barrels.

Saudi Arabia had offered to reduce its output if Iran agreed to freeze production, a shift in Riyadh’s position as the kingdom had previously refused to discuss output cuts.