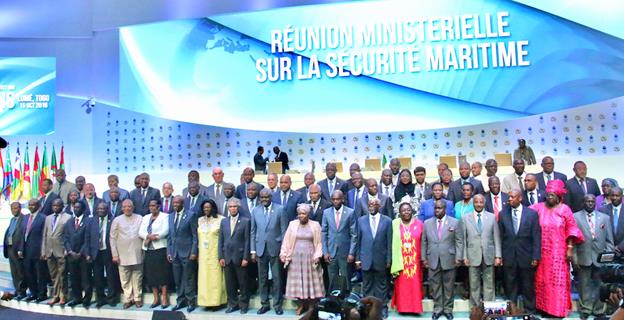 Members of the Executive Council at the Extraordinary Summit on Maritime Security, Safety and Development on 13 October, in Lomé, Togo. (Photo: DIC-AU)

She made the statement while  addressing the Members of the Executive Council at the Extraordinary Summit on Maritime Security, Safety and Development on 13 October, in Lomé, Togo.

“The economic value of the Blue Economy for Africa is estimated at over one trillion US Dollars, with hundreds of thousands of job opportunities for young African women and men”.

“Although exports and imports are processed through our oceans, seas, and waterways, we are not receiving the requisite benefits, including the jobs,” Zuma said.

The Foreign Ministers were meeting to collectively push forward Africa’s agenda on the blue economy and maritime security in the context of Agenda 2063 and the African Integrated Maritime Strategy (AIM 2050) Strategy.

In his welcoming remarks, Minister of Foreign Affairs, African Cooperation and Integration of the Republic of Togo, H.E. Prof Robert Dussey, noted that Africa has reached a stage where promises and good intentions are no longer sufficient. He said that Africa needs to go beyond intentions and take concrete actions that will work to contribute towards securing and safe-keeping our maritime resources.

As a practical solution, the Chairperson of the AU Commission proposed the training of young women and men in various sectors of the maritime industry.

She called for the transformation of the sector, which ought to reverse the trend where 90% of Africa’s import and export are by sea, yet less than 2% of ships globally are owned by Africans, and not more than 1% of Africans are seafarers.

The Chairperson challenged the Member States to invest and explore the oceans, seas, and waterways to create jobs and wealth for the benefit of the citizens.

She said such a transformation will require greater involvement and opening up of opportunities for women so as to realize the objectives of Agenda 2063: The Africa We Want.

On his part, the Chairperson of the Executive Council and Chad’s Minister of Foreign Affairs, H.E. Moussa Faki Mahamat, stressed the importance of adopting the Charter, which he said, will consolidate instruments and frameworks that will secure and develop seas and waterways through which 90% of Africa’s transactions transit.

The Executive Council Session will recommend the Draft African Charter on Maritime Security, Safety and Development for adoption by African Heads of State and Government at a Summit expected to take place on 15 October 2016.