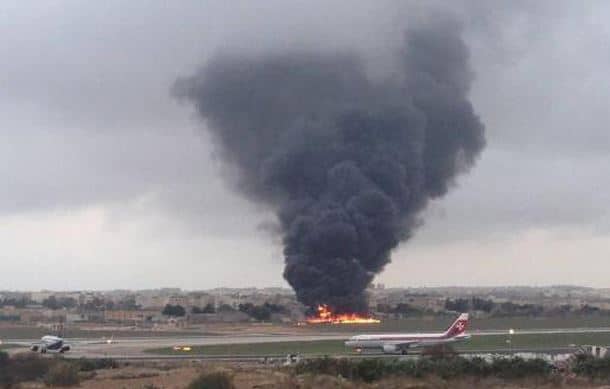 The European Union (EU) has said that none of its border officials were on board the plane that crashed in Malta on Monday.

A light aircraft on a French customs surveillance operation crashed in Malta on Monday shortly after take-off, killing all five people on board.

There were earlier reports which indicated that EU border officials were on board, but  EU Foreign Affairs Chief Federica Mogherini said on Twitter that none of its officials were involved in the crash.

A witness Ben Cundall told CNN that passengers on a nearby flight waiting to depart watched in horror as flames shot out and a dark plume of smoke billowed from the wreckage.

“Everyone was screaming; the flames were the length of an aircraft, so it was clear to everyone what had happened straight away,” Cundall said.

The Fairchild Metroliner, which was taking part in an operation to track illicit human and drug trafficking routes, crashed at 7:20 a.m. (1:20 a.m. ET) Monday, officials said.

A statement from Maltese government said their inquiries are on to ascertain the cause of the crash.

“Official information, footage, and eyewitnesses, including three members of the Armed Forces of Malta at the nearby Safi Barracks, and two commercial airline pilots, clearly indicate that there was no explosion prior to impact.

“Several inquiries, as established by international rules and the laws of Malta, are currently underway to establish all facts.

“All five people aboard the plane were French nationals.

“The flight is part of a French customs operation that has been going on for the past five months.

“It has been scheduled as a local flight and it was due to return within hours “without landing in third countries,” the Maltese government said in a statement.

Witness Lauren Azzopardi, who filmed the crash on his car’s dashcam as he was driving to work, told CNN he heard a blast as the plane slammed into the ground.

“I saw the plane go vertical. It was coming at a very fast speed,” Azzopardi said. “It kind of turned and planted into the ground.”

The plane was registered in the United States to a company called Worldwide Aircraft Services but the Maltese government said it had been leased to a Luxembourg company.