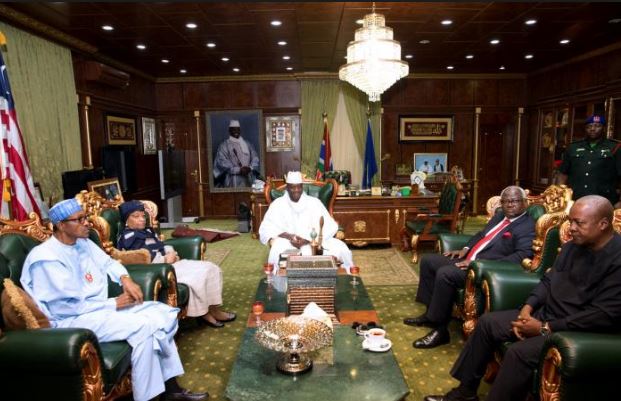 ECOWAS leaders on Tuesday converge on the Gambian capital Banjul, to peacefully pressure President Yahya Jammeh to re-consider his rejection of the election results and respect the wishes of the Gambian people.

The West African leaders in Banjul tried to convince Yahya Jammeh to acknowledge his defeat in the presidential election, met a stone wall, but remain resolute.

They have not yet reached an agreement in this direction, said Tuesday evening the Liberian President Ellen Johnson Sirleaf, who had led the delegation.

“We did not come for an agreement; we came to help the Gambians to organize the transition,” APA report on Wednesday.

“It is not something that can be accomplished in one day, it is necessary to work on it,” Mrs. Johnson Sirleaf, current chairperson of the Economic Community of West African States (ECOWAS) said.

The West African leaders, including Nigerian President Muhammadu Buhari, outgoing Ghanaian President John Dramani Mahama and Sierra Leone’s Ernest Bai Koroma, met with Yahya Jammeh who, according to Sirleaf, expressed some concerns to them that were not specified.

“The ECOWAS mission came here to meet him to better understand the current situation,” she added.

“We met with all the parties concerned and now we will report to our peers at a meeting of ECOWAS scheduled on Saturday in Abuja, the federal capital of Nigeria where the West African organization has its headquarters,” added Sirleaf.

She however assured that there was no need for disappointment since she thinks the approach will work.

Mrs Sirleaf stressed that all the interlocutors of the delegation had committed themselves to peace and stability in the Gambia.

Meanwhile, Mr. Jammeh’s party, the Patriotic Alliance for Reorientation and Construction (APRC), lodged an appeal Tuesday to the Supreme Court to seek the annulment of the results of the December 1 elections in which President-elect Adama Barrow beat Jammeh by some 19,000 votes, according to documents.

The APRC considers that the Independent Electoral Commission has not properly compiled the results and states that in one part of the country a significant number of its sympathizers were intimidated and prevented from voting.