Multi-National Force Intelligence HQ To Be Sited In Abuja

The Federal Government on Friday signed a Memorandum of Understanding (MoU) siting the headquarters of the Regional Intelligence Fusion Unit (RIFU) of the Multi-National Joint Task Force (MNJTF) in Abuja. 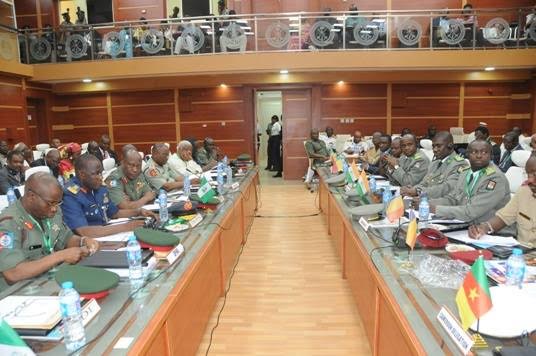 The Minister of Foreign Affairs, Mr Geoffrey Onyeama, at the event, decried the activities of the Boko Haram insurgents in the West African sub-region.

Onyeama said that the establishment of the Unit was important to totally defeat the insurgency operating in the Republic of Benin, Cameroon, Chad, Niger, and Nigeria.

“The Regional Intelligence Fusion Unit is something that was created within the framework of the intelligence of the insurgency that this country and neighbouring countries have been facing.

“In coordination with some of our country supporters like France, it was decided to institutionalise the sharing of intelligence among the frontline states engaged in the battle against Boko Haram.

“It was agreed that in institutionalising this intelligence sharing cooperation mechanism a headquarters should be established.

“And it was agreed that the headquarters of this intelligence sharing mechanism should be located here in Abuja,” he said.

The minister said the formal establishment of the headquarters of the Unit in Abuja was a very important step in the battle against extremism and terrorism.

“We know that beyond the classical military confrontation, one of the most important weapons that we have in fighting terrorism and insurgency worldwide is intelligence sharing.

“Intelligence gathering ability has to be really tip-top to really make headway in this fight because it is now a different kind of fight, no longer so much in the battlefield.

“But as we see with these sporadic terrorist suicide bombers using improvised explosive devices, penetrating local communities, what we absolutely need in that fight is intelligence.

Onyeama pledged Nigeria’s commitment to supporting the RIFU to make it a success.

“As we are the host of this international organisation, we will do everything possible to make sure that your residence in our country is a happy one.

“We commit to providing you with the enabling environment to be able to carry out your work effectively as a member of the organisation.

“We also commit to doing everything to ensure your success because your success means the security of not only the sub-region but increased security for the whole world,” he said.

Responding, the Coordinator of RIFU, Mr Dennis Myntia, from Cameroon, said Boko Haram could not be defeated without intelligence sharing and commended Nigeria’s contributions to the Unit.

“Without intelligence sharing, nothing can be done; not only in the field of security or terrorism but on every field that exists.

“The intelligence we have made helped in the arrest of the masterminds of the first Boko Haram attack in Chad, and also in Niger.

“Nigeria gave us some telephone numbers and we sent them to Niger, and Niger, after investigation, succeeded in arresting the head of the vast network in Niger.

Myntia said the Unit had operatives in all the member-countries who were inter-linked and sharing intelligence all the time.

“As Boko Haram has network, we have a network also in sharing intelligence if not we cannot succeed. We have to be ahead of them.

“We have operatives in every country involved in the fight against Boko Haram in the region,” he said.

He said the MoU was a proof that Nigeria was determined to go all out to end security challenge in the country and all over the world.

“This is because RIFU is not working for Nigeria only but for all the regions.

“We in RIFU are determined to do our job in order to satisfy the high interests of our Heads of State and to end the insurgency in our region by intelligence sharing.

On the financial commitments to RIFU, Myntia said: “Nigeria is contributing more; we cannot compare Nigeria with other countries. Most of the finances come from Nigeria”.