“I think it’s fair to say the foundation for a very strong and lasting relationship between Nigeria and China has been built by both our President, President Muhammadu Buhari and President Xi Jinping of China,” Vice President Yemi Osinbajo, SAN, stated today at the Presidential Villa, Abuja. 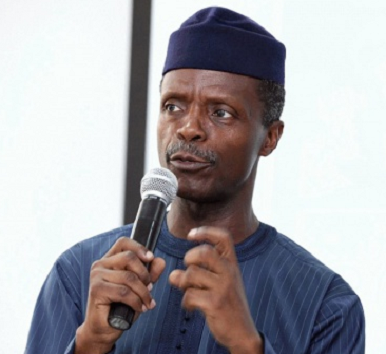 Speaking at a courtesy call by a Chinese delegation led by the Vice Minister of Commerce, Mr. Qiam Keming, Prof. Osinbajo lauded the existing excellent relations between Nigeria and the Peoples Republic of China.

“President Muhammadu Buhari considers our relationship with China a priority and I am sure in your discussions with the Minister of Budget & National Planning, he would have told you the importance the President attaches to our relationship,” the Vice President stated while receiving the delegation that consisted Chinese members of the restored Nigeria-China Economic and Technical Joint Commission. (The commission which met last in 2009 has just resumed its meeting for the first time since then.)

Vice President Osinbajo noted that the relationship between the two countries was being further enhanced by President Muhammadu Buhari through the resuscitation of the Commission. He commended the fruitful deliberations between the two countries on the platform of the Nigeria-China Joint Cooperation Commission as he was briefed at the meeting today attended by four federal ministers: Budget & National Planning; Senator Udoma Udo Udoma, Agriculture & Rural Development; Chief Audu Ogbeh, Information & Culture; Alhaji Lai Mohammed and Minister of State for Budget & Planning, Mrs Zainab Ahmed, among other top federal government functionaries.

Prof. Osinbajo expressed his satisfaction with the outcome of the joint commission’s meeting in Nigeria, stating that “the various subjects discussed are those we consider important especially because they are so important for the economic advancement of our country.”

He then noted that for the purpose of mutual economic interests of both countries, the Chinese government should consider reviewing downwards its tariffs for Nigeria’s products exported to China as is being done to China’s neighbours. According to him, “this is why your offer of agricultural modernization plan are very important to us and we will follow them up as quickly as possible.”

“Our government is investing a great deal in agriculture, not only for increasing job opportunities for our people, but also in feeding our people and for exports”, he disclosed.

While appreciating China for its readiness to partner with Nigeria in establishing industrial parks/free trade zones, the development of critical infrastructure, the VP sought China’s support for the Buhari administration’s economic diversification policy.

Earlier, China’s Vice Minister of Commerce and leader of the Chinese delegation, Mr. Qiam Keming told the Vice President that the objective of the visit to Nigeria “is to implement the outcome of the last meetings between the Presidents of Nigeria and China and to enhance existing cordial friendship and bilateral trade relations between the two countries”.

While praising President Buhari who has met with his Chinese counterpart three times already including at a state visit to China, Keming stressed the importance of strengthening the bilateral relations between the two countries, stating that China was ready to partner with Nigeria in agriculture modernization, infrastructure development, industrialization and the diversification of Nigeria’s economy.