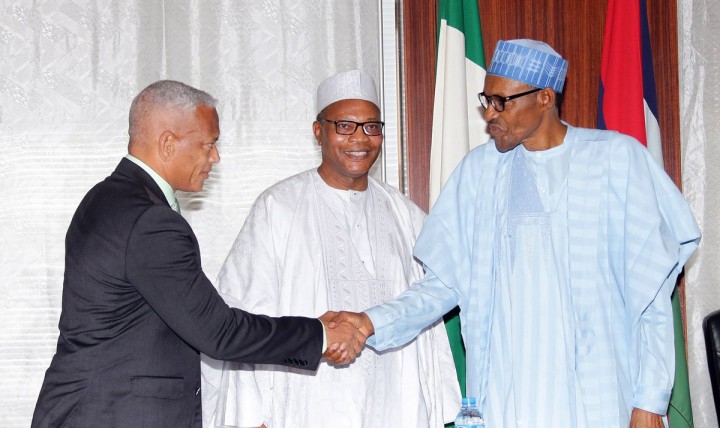 President Muhammadu Buhari has declared that his administration will abide by the decision of the International Court of Justice on the Nigeria – Cameroon border.

This is stated  in a press release made available to the media by the Senior Special Assistant to the President on Media & Publicity, Garba Shehu on monday in Abuja.

Shehu said that President Buhari while Speaking Monday in Abuja when he received a United Nations Mission led by a Special Representative of the Secretary General, Mohammed Ibn Chambas,  said that Nigeria will not do anything to hamper the work of the various UN committees on the border.

“We will abide by the law. Having accepted the judgment of the ICJ, we are ready to support the security and logistics requirements of the Cameroon-Nigeria Mixed Commission (CNMC) to carry out the border demarcation,” the President said.

According to him, President Buhari expressed his total support for the exercise, recalling that as Military Head of State between 1984 and 1985, his administration instituted the demarcation of the Nigeria land borders from Benin to Bakassi and urged that all committees be allowed to carry out their functions in line with the ICJ decision.

Earlier, Mohammed Ibn Chambas, Chairman of CNMC, had informed President Buhari that 2,001 kilometers out of 2,100 kilometers separating Nigeria and Cameroon had been marked, leaving a balance of 99 kilometers to conclude the demarcation.

He expressed hope that the remaining area will be completed latest by the first quarter of next year following the relative calm that has returned to border areas earlier inhabited by Boko Haram terrorists.