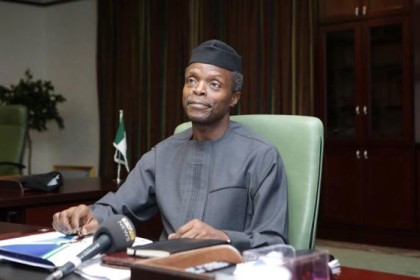 Speaking with the media shortly after participating in a Presidential policy dialogue in Lagos, the Vice President says the Calabar-Lagos rail line and the Lagos-Kano rail line are already drawing foreign investments into the rail transportation system.

The Vice President says the country with an estimated 170 million people and a very vibrant economy is certainly a new bride for investors.

He cited a number of foreign investors who have shown interest to invest in the country while some others already exist; giving an example of a Mexican company that is already investing in agriculture in ten states of the Federation.

“I think the scope for investments is there, the appetite is there and i believe that what everyone is looking forward to is just signs that things are stabilizing, that the environment is one where there is governance and that there is consistency in the policy.”

He said that the government remains focused on ensuring that enduring investments, in the form of foreign direct investment are coming while also not losing focus on local investments.

According to him, some of the investments that we’re seeing, to mention a few are the Dangote Refinery, 650,000 barrel refinery, there’s the fertilizer plants, the Indorama one, the sorghum plant that is being done by Honeywell, there’s the 500-kilometre subsea pipeline that’s also a Dangote project.

He stated that government is hoping that the flexible exchange rate will encourage foreign investments noting that Nigeria is the next frontier for investment.