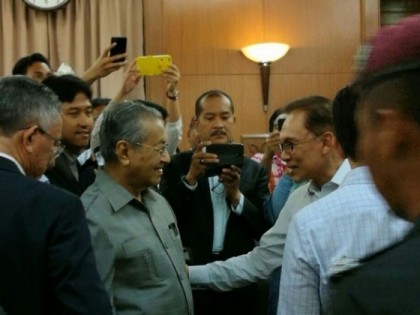 Malaysia’s politics took a surprising turn with Mahathir’s visit to the Kuala Lumpur High Court, which is hearing Anwar’s application to challenge the controversial National Security Council Act 2016 that came into force on Aug. 1.

The 90-year-old Mahathir, who ruled from 1981 to 2003, greeted Anwar, 69, inside the courtroom. Both smiled, shook hands and later held talks in a private room for nearly an hour.

Mahathir, however, played down the significance of the meeting.

“I am interested in this case. It’s about the National Security Council. I have written [about the NSC] in my blog. He is doing the same thing, trying to stop it. So I came to meet him, have a long chat with him, about what he is doing,” he told reporters outside the courtroom, adding, “I am not making peace with him”.

Anwar was Mahathir’s deputy from 1993 to 1998. Once seen as his blue-eyed boy and heir-apparent, the country was thrown into turmoil when Anwar was unceremoniously sacked on Sept 2, 1998 after being accused of “immorality”.

Anwar was subsequently charged with corruption and sodomy, charges he claimed were trumped up by Mahathir to stop him from challenging his power. Anwar retaliated by mounting a “reformasi” or reform movement, sparking what was then unprecedented street rallies that drew tens of thousands who demanded Mahathir’s resignation.

The “reformasi” movement petered out after Anwar was convicted. He spent six years in jail before he was freed in 2004 after winning an appeal.

For years, Mahathir continued to disparage Anwar, even as recently as April when, in an interview with The Australian, he again questioned Anwar’s morals.

“The fact is, people complained about his moral behaviour. For me, that behavior is not acceptable as a person who was about to succeed me as president of the party,” Mahathir was quoted as saying by the newspaper.

In May, Anwar warned his supporters against being too enamoured with Mahathir’s campaign to unseat Najib. Mahathir, he said, was only interested in getting rid of Najib and not true reform.

“What is disturbing is the absence of remorse and no unequivocal support for reform,” he said in an open letter penned from prison where he has been incarcerated for two years now on a second sodomy charge that he claimed was masterminded by Najib to ruin his political career.

Mahathir has been on a war path with Najib following accusations that he pocketed some $700 million from a controversial state fund, 1Malaysia Development Berhad, which he founded and chaired the advisory board of until May.