Abdul JimohSeptember 21, 2016 6:27 pm 0
Femi Adesina, Abuja; President Muhammadu Buhari has applauded the long history of economic relationship between Nigeria and France on the one hand, and Nigeria and Switzerland on the other. 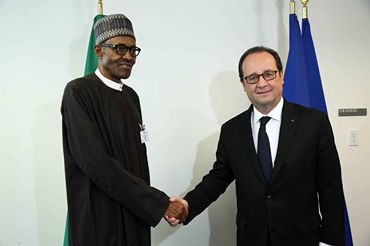 At separate bilateral meetings on the sidelines of the ongoing 71st United Nations General Assembly in New York, United States of America, the President welcomed more investment and economic partnerships, saying Nigeria was a fertile ground for handsome return on investments.
“Apart from your country’s close relationship with us, you have the same with most of our neighbours,” President Buhari told Francois Hollande of France. “We seek more collaboration, particularly in agriculture, mining and security.”
The President told his French counterpart of the Presidential Committee on the North East, which he described as a one-stop mechanism on development partnership for a zone that had been ravaged for many years by Boko Haram insurgents, and which needed urgent rebuilding.
Responding, President Hollande pledged that France would not only fully engage with Nigeria on different fronts, but would also provide humanitarian assistance in the North East.
“We will invest in Nigeria, we believe in her,” the French President said.
At another audience with President Johann Schneider-Ammann of Switzerland, President Buhari sought his counterpart’s cooperation on speedy repatriation of Nigerian money stashed in that country, stressing that Nigeria needed such resources, particularly for infrastructure.
With the two countries having agreed on projects to which the restituted funds would be deployed, President Schneider-Ammann promised quick action, as soon as the draft agreement was signed. He also pledged consolidation of mutual trade relationships, infrastructural development as well as support in training and equipping of the Nigerian military.