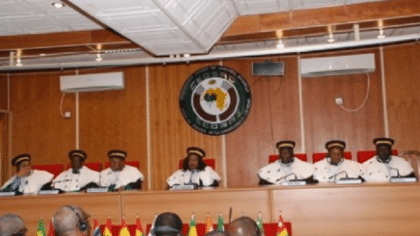 The ECOWAS Court of Justice says it has adjudicated 136 out of 271 cases lodged before it from 2001 till date.

Vice President of ECOWAS Court of Justice, Justice Micah Wilkins stated this during press briefing to herald the commencement of 2016-2017 legal year of the court.

The ECOWAS Court of Justice was established through the instrumentality of the provisions of article 6 and 15 of the 1993 revised treaty of ECOWAS.

It serves as an Inter- state community court vested with the responsibility of interpretation and application of the revised treaty and other community texts.

As the court prepares for its 2016 -17 legal year, the Vice President of the court said since its inception in 2001, the court held 694 sessions and determined 136 cases while 60 others are still pending.

The court which jurisdiction was initially for member states and community institutions now has four distinct mandates.

They include community court, an arbitration tribunal, an ECOWAS public court and a human rights court.

The theme for this year’s celebration is “The Contributions Of The ECOWAS Court Of Justice In The Fight Against Terrorist Financing And Money Laundering Within The West African Sub-Region: The Perspective Of GIABA”.