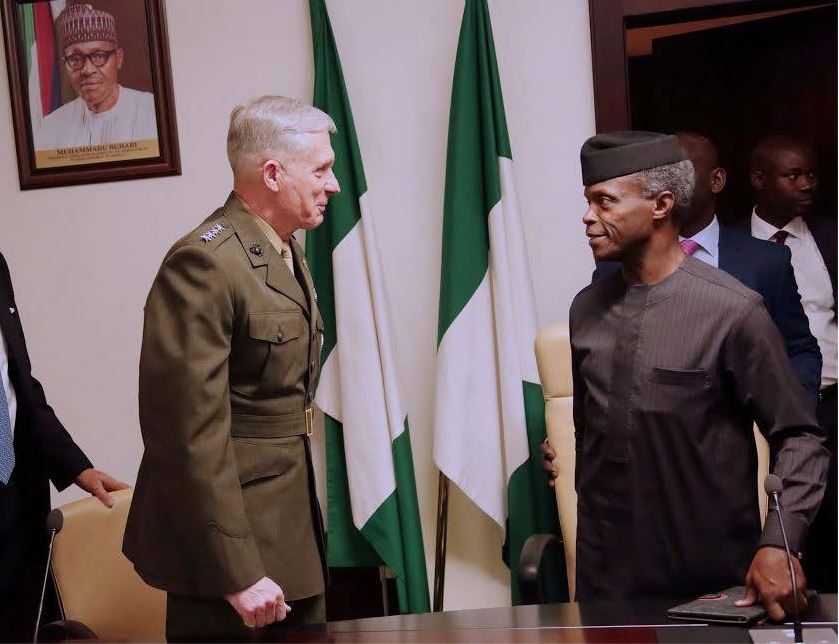 Time For Nigeria, US To Deepen Relationship Based On Trust, Says Ag. President Osinbajo

Laolu Akande, Abuja: The time has come for both Nigeria and the United States to deepen the long-standing relationship between the countries based on mutual trust, according to Nigeria’s Acting President Yemi Osinbajo, SAN.

Nigeria’s relationship with the US, he observed, is a very important one “and has been so for many years, even so now at a time like this for us,” adding that the Federal Government is appreciative of US support over the last few years.

According to him, it is the belief of the Buhari presidency that the United States is committed to helping us with some of our challenges especially in the Northeast, explaining also that issues around human rights concerns in the country should be viewed against the context of an unusual kind of warfare with terrorists and insurgents.

“The kind of warfare we are engaged with in many ways are unprecedented for our military,” the Ag. President said while noting the sheer brutality and mindlessness of terrorists who are “prepared to kill children in their sleep, abduct girls and prepared to die, even using teenage girls as suicide bombers.”

He restated the readiness of the Buhari administration to conclusively end the problem “as quickly as possible.” He referred to attacks by remnants and splinter groups from the terrorists, and added that nonetheless they can no longer launch military attacks.

While emphasising on the support of the US so far, he stated that the Federal Government will welcome more US military cooperation and also assistance in dealing with the consequent humanitarian situation in the NorthEast.

“The US has been a reliable partner we can trust, especially from what the US has done in the past, we want to see how much more you can do for us and the region,” Prof. Osinbajo stated.

In his remarks, the head of the US Africa Command, General Waldhauser expressed the readiness of the US government to “accelerate” its contributions, adding that there is a sense that “we want to get on and solve the problem.”

He noted that his visit to Nigeria at this time is about developing further “the friendship and trust that we have in common,” while also agreeing with the Ag. President that the brutality shown by the terrorists is “what we have never seen before.”

Also speaking, Ambassador Symington said he had just concluded a visit to all the geo-political zones of the country and has concluded that “Nigeria is one of the greatest countries in the world with the potential to change the world.”