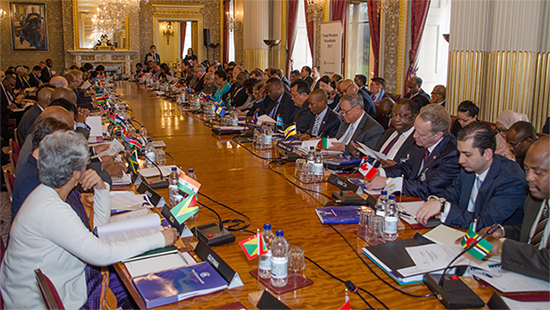 Commonwealth trade and investment ministers concluded their two-day meeting in London today with a commitment to make full use of the ‘Commonwealth advantage’ to boost trade within the 52-member bloc.

“There is a 19 per cent trade advantage within the Commonwealth. We must see how the global trade landscape can be changed in favour of that advantage and the particular factors that drive and differentiate intra-Commonwealth trade and investment be improved.”

At the meeting, ministers focused on opportunities for the Commonwealth to strengthen collaboration by promoting intra-Commonwealth trade and investment flows. They identified key challenges hindering trade competitiveness and discussed how to overcome them through mutual support.

Ministers underscored the importance of building a global economy that benefits all of the Commonwealth’s 2.4 billion citizens, noting that developing countries need an enabling global trading environment to achieve the Sustainable Development Goals.

Against a backdrop of global economic uncertainty and a slowdown in worldwide growth, the Commonwealth is currently assisting more than 30 countries on their effective integration into the global trading system. It is building their capacity to take advantage of opportunities, including improving trade competitiveness.

Lord Marland, Chairman, Commonwealth Enterprise and Investment Council said, “there is an opportunity for the Commonwealth to demonstrate global leadership on free and fair trade. Businesses want to see stability, transparency, predictability and the rule of law and the Commonwealth can work together to improve the ease of doing business in all member countries. This will allow companies, particularly Small and Medium Enterprises, to have the confidence to trade and invest across the Commonwealth. Creating a conducive business environment and helping businesses find a route to market is core to the enabling role of our organisation. It was essential to have the private sector fully engaged in the Trade Ministers Meeting.”

Discussions took place on the likely impact of the UK’s withdrawal from the European Union, which could disrupt market access into the UK and Europe.

The Secretary-General stressed that “no country should be left behind” in the post-Brexit trade landscape. Ministers acknowledged that Brexit provides opportunities for broader cooperation on trade and investment between Commonwealth countries and committed to examining specific recommendations for practical initiatives that can be recommended to the next Commonwealth Heads of Government meeting in 2018.