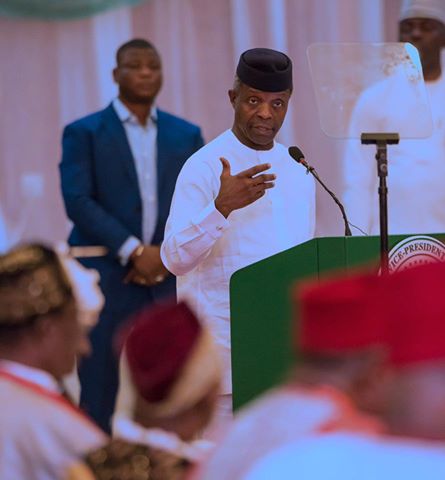 *Meets traditional rulers from South-East, as consultations continue over agitations
*Says manner of agitations, unlawful and violation of Nigerian constitution

REMARKS BY THE ACTING PRESIDENT FEDERAL REPUBLIC OF NIGERIA, HIS EXCELLENCY, PROF. YEMI OSINBAJO, SAN, GCON AT A MEETING WITH TRADITIONAL RULERS FROM THE SOUTH-EAST AT THE OLD BANQUET HALL, STATE HOUSE, ABUJA ON JUNE 18, 2017.

Let me begin by thanking all of our royal fathers who have taken the time to come today. I know the notice has been extremely short but the reason why you have nevertheless honoured our invitation is that of the importance that you have attached to the consultations that we are holding and the reasons for those consultations.

So, I welcome you our royal fathers, distinguished elders and leaders to this important meeting. 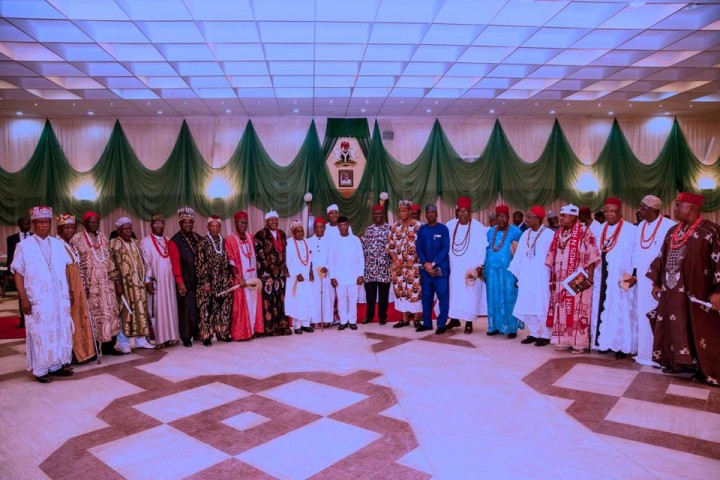 But in planning these meetings, I was conscious that we should have a separate set of meetings with our traditional rulers because of the peculiar and unique positions that they hold especially in their relationships with those who live in their kingdom and this is the reason we chose to have two separate meetings – One with the South-East traditional rulers and tomorrow evening, I will be meeting with traditional rulers from the North.
I want to emphasise that it is the peculiar, unique position that traditional rulers occupy that makes this separate consultation important and deserving and I really would want us to take advantage of this opportunity.
Most of us are aware especially for those who have been following the consultations, we have worked very hard to ensure that the representations across the two zones that we are interested in consulting with initially is as wide as possible and we have tried to inculcate that even in our traditional rulers today.
As you are aware there has been agitation from some of our youths in the South-East urging secession, the creation of Biafra. In apparent response, young people in the North, under the aegis of Arewa youths have purportedly issued an ultimatum where they have set a date for the eviction of persons from South-East region who live in the Northern states. 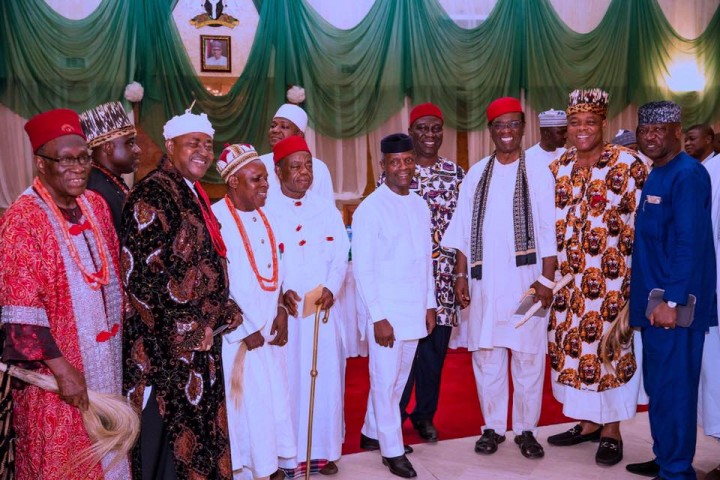 The manner of those agitations, the method and objectives are wrong, unlawful and the violation of the laws of Nigeria and the constitution of Nigeria. I want to repeat that both the agitations for secession and the ultimatum to leave the Northern states are wrong and a violation of our constitution.
Our constitution says in Section 2 that Nigeria is one indivisible and indissoluble sovereign state to be known by the name the Federal Republic of Nigeria and that is the law of our country.
Let us not be in any doubt about the fact that the Federal Government is committed to ensuring that our country remains united.
And that anyone who violates the law in the manner such as we are seeing all over the place will be met with the full force of the law. 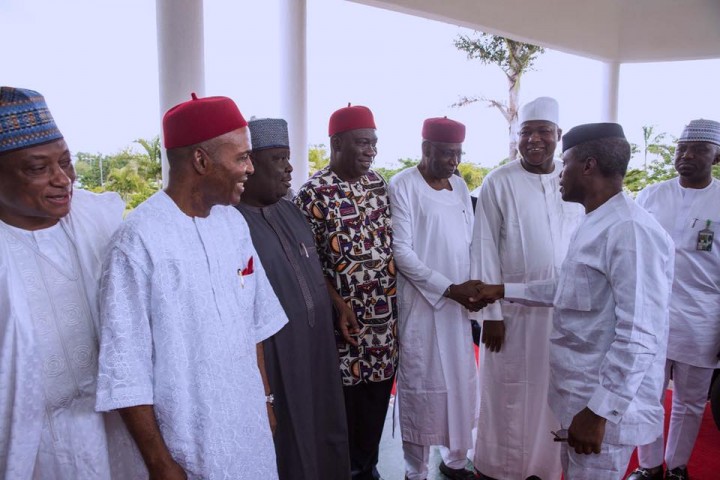 And the reason why it is so, is because Nigeria’s unity is one for which enough blood has been spilled and many hundreds of thousands of lives have been lost. Many have paid for the unity of this country with their lives and it will be wrong of us as men and women of goodwill in this generation to toy with those sacrifices that have been made.
This is the reason why men and women of goodwill in our generation must not tolerate any tendency that drags us in the direction of yet another civil conflict.

But we must be sensitive to the reasons why there are agitations by the various young men and in fact several others across the various zones of this country. Many have to do with perceived marginalisationsome have argued, safety in the different zones have been compromised in various ways.

But I want to say the only way to make things right is to do things right. And it will be wrong of us to approach even our grievances by threatening to disobey the laws or by threatening the integrity of our nation.
What the Federal Government of Nigeria is committed to do is ensuring we listen to all the reasons, the various suggestions, the various agitations, and the reasons for those agitations and to ensure that we do justice by all persons regardless of where you are from in this country. That is the commitment of Federal Government which I am able to make to you today.

I recall that President Muhammadu Buhari had said once that as a person who served in the Nigeria Army, he committed his life to the service of this country and that he did so not alone but with others from the North, South, West and East of Nigeria.

And that he fought side by side from the Congo to some many related places where he has served the country, and they served side by side protecting each other’s lives and ensuring that all of them were safe. That they were in that Nigerian Army, men and women from all parts of Nigeria and that is the reason according to him why he is so committed in ensuring that Nigeria remains one united country.

Our greatness lies in our being together and I believe very strongly that as our royal fathers, you will ensure the message is clear to all, that the greatness of any people lies in their ability to work together despite our differences, despite the types of offense that have been caused between each other, the greatness of any community lies in unity.
I trust that you, our royal fathers, will give us the right directional advice to ensure that our country remains together.