Some Nigerians affected in  the February xenophobic attacks in Limpopo Province of South Africa have called on the Federal Government to assist them. 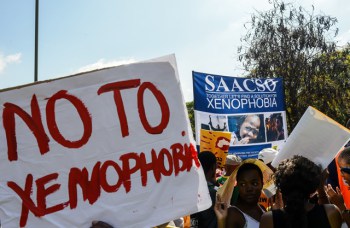 Mr Oluwasegun Oyebanji, the Vice Chairman of Nigeria Union in the province, told the News Agency of Nigeria (NAN) on  telephone that more than 20 Nigerians affected in  the incident in the area were facing hard times.

“ The affected victims in the province are suffering.

“ A woman whose husband was killed during the attack is now  left with four children. The late husband was the bread winner of the family. It has not been easy for her.

“ Another Nigerian whose skin was scarred  is just recovering from the wounds inflicted on him and he needs urgent help.

“ We need assistance from the government,” he said.

He said a Nigeria-based priest had visited some victims and had given  them cash for their upkeep.

Oyebanji  also accused some officials of the consulate of neglecting the victims, saying  those  who visited them after the attack hurriedly left.

According to him, the consulate officials did not wait to listen to the problems of the victims,  especially those who lost  their  passports.

“ As we speak, Nigerians who lost their passports have not been given new ones and they urgently need it to restart life.

“ We appeal to the government to call the consulate officials to order.

“ They should wake up to their responsibilities  and ensure that the welfare of Nigerians is given priority attention,” he said.

But responding to the issues raised by the union, Mr Godwin Adama, the Consul General in South Africa, said the mission had visited the province twice since  the attack.

“ Following the attack on  some Nigerians in the province, we moved in immediately, met with the victims, extended welfare support  to the wife of the Nigerian killed and also met with the South African police,” he said.

Adama also said the mission facilitated the visit of a Nigerian pastor to the victims after the incident.

He said that based on the mission`s advice, Nigerians in the province had initiated  a  mechanism aimed at flushing out criminals in their midst and checking  the  frequent attacks by South Africans.

“ As we speak, the mission has not received any conflicting views or incidents from the area since we intervened,”  he  said. (NAN)