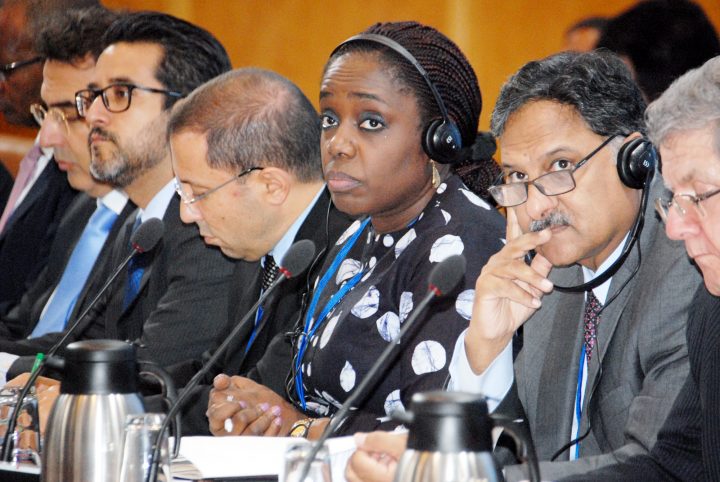 Nigeria has asked the World Bank Group and the International Monetary Fund (IMF) to scale up the provision of and access to renewable energy in order to deliver development results and meet global climate goals.

Adeosun stated that scaling up renewable energy was a “win-win area” to deliver development results and contribute to the global climate goals.

She said, “We have a major energy infrastructure gap to meet the needs of industrialization. Providing access to energy to all parts of Nigeria, both urban and rural, is a priority.

“If we succeed, we estimate that this could unleash the development potentials of two-third of our population of 180 million.”

The Minister added that generation of renewable energy was a financially attractive option for reaching rural populations.

She further emphasized the need for business models from other countries to serve as a template in the provision of affordable energy.

While canvassing the reinforcement of regional integration process by the World Bank and the IMF, Adeosun said the process would boost trade between countries and serve as a potential growth driver.

“We believe that part of the solution must be regional, multi-country initiatives on infrastructure development. Though complex and often not easy to undertake, there are also successful cases of such projects.

“For instance, a coastal superhighway from Lagos to Dakar in West Africa would cut across 11 economic territories. Another Trans-Sahel highway from Northwest Nigeria to Mauritania would provide access and boost economic activities of land-lock countries like Niger, Burkina Faso, and Mali,” stated Adeosun while speaking on behalf of Nigeria and 30 other countries during the G24 Ministers and Governors meeting.

The IMF Managing Director, Christine Lagarde, advised low-income countries to be very cautious in dealing with investors, noting that there was a huge surge yield on the path of investors.

The Chief Executive Officer of the World Bank, Kristalina Georgieva, urged developing countries to look at other sources of finance rather than dependence on the Paris Club.

Georgieva said, “It is imperative for us to maximize finance for development and also critical for us think of comparative strength for significant finance to flow into developing countries.”

On energy deficiency, she counseled developing countries to identify what could be done to create a favourable environment for renewable energy.

In a communiqué at the end of its meeting, the G24 Ministers and Governors urged the World Bank Group and the IMF to continue strengthening their assistance in improving domestic resource mobilisation and enhancing its contribution to inclusive growth through progressive tax policies, as well as more efficient and better targeted public spending.

The Body reiterated the importance of scaling up infrastructure investments to achieve sustainable development goals.

“We welcome the support of the IMF, the World Bank and other international Financial Institutions in increasing the efficiency of public investments in infrastructure, as well as their impact in improving connectivity, including at the regional level, and addressing distributional and climate objectives,” it stated.

The G24 Ministers and Governors also called on Multilateral Development Banks (MDBs) to deliver on their ‘Joint Declaration of Aspirations on Actions to Support Infrastructure Investments’, including through concrete and time-bound actions.

This, it added, will help to develop new risk mitigation instruments and infrastructure investment as an asset class.

“We support a quota-based, adequately-resourced IMF that is less dependent on borrowed resources. We call for at least maintaining the current lending capacity of the IMF,” the group said.

The group also called for strengthening the efforts of the IMF and the World Bank towards greater representation of under-represented regions and countries in recruitment and career progression, including at the managerial levels.