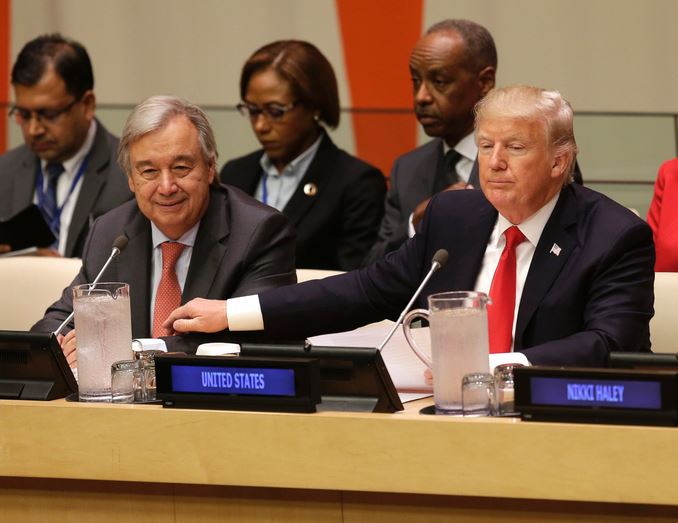 UN Secretary-General António Guterres has expressed strong hope that US President Donald Trump would retain what he termed the ‘breakthrough’ agreement on Iran’s nuclear programme.

The Secretary-General stated this in response to the announcement by Trump on Friday not to re-certify Iran’s compliance with the accord.

Guterres said the adoption of the 2015 accord reached between Iran and a group of six countries on monitoring Iran’s nuclear programme was an important breakthrough to consolidate global peace and security.

“The Secretary-General has repeatedly said that the adoption of the Joint Comprehensive Plan of Action (JCPOA) was a very important breakthrough to consolidate nuclear non-proliferation and advance global peace and security.

“The UN chief ‘strongly hopes that it will remain in place’”, according to a statement issued by UN Spokesperson Stephane Dujarric.

The JCPOA was endorsed unanimously by the UN Security Council in 2015 between its five permanent members – China, France, Russia, the United Kingdom and the United States – plus Germany, the EU, and Iran.

The accord set out rigorous mechanisms for monitoring limits on Iran’s nuclear programme while paving the way for lifting UN sanctions against the country.

Similarly, Yukiya Amano, the Director General of the International Atomic Energy Agency (IAEA) issued a statement in support of remaining in the agreement.

Amano said that the IAEA, the UN’s nuclear watchdog, had since 2016 been verifying and monitoring Iran’s implementation of its nuclear-related commitments under the JCPOA.

The IAEA chief said the verification and monitoring of Iran’s implementation of its nuclear-related commitments were as requested by the UN Security Council and authorised by the IAEA’s Board of Governors.

“As I have reported to the Board of Governors, the nuclear-related commitments undertaken by Iran under the JCPOA are being implemented,” he said.

Amano explained that Iran was now provisionally implementing the Additional Protocol to its Comprehensive Safeguards Agreement with the IAEA.

According to the IAEA chief, the additional agreement was a powerful verification tool which gives inspectors broader access to information and locations in Iran.

“So far, the IAEA has had access to all locations it needed to visit,” Amano said, adding: “At present, Iran is subject to the world’s most robust nuclear verification regime”.