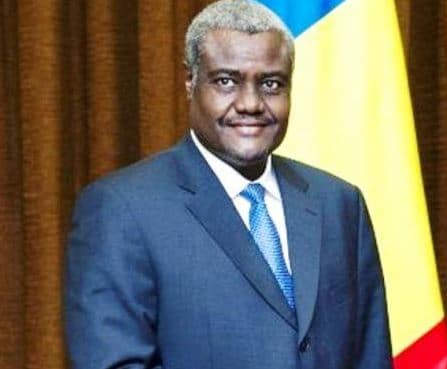 Reports say that he will replace South African Nkosazana Dlamini-Zuma.

Mr. Mahamat beat four others in the contest at a session of the 28th African Union Summit in the Ethiopian capital Addis Ababa.

“The Chairman was elected in the fourth round,” said former Burundian President Pierre Buyoya.

“We pledge to work with him to defend the pan-African agenda of integration for Africa, as well as democracy, sovereignty and prosperity for all of its people,” a statement from the Kenya Presidency said.

Mahamat was until his election the Foreign Minister of Chad, a position he has held since April 2008.

He served as Prime Minister between June 2003 and February 2004 and stepped down amidst a civil service strike.

Other portfolios he has held include Minister of Public Works and Transport in 2002.

The new AU Commission Chairman attended university in Congo-Brazzaville where he studied public law. He went on exile after Hissen Habre took power in 1982 and returned from exile when Idris Deby Itno took power in 1991.

He was born in the country’s eastern town of Biltine and belongs to the same ethnic group as President Deby – the Zaghawa. He served as campaign manager for Idris Deby during the 2001 presidential elections.

He is fluent in three international languages, English, French and Arabic and is married and has five children.

The African Union Commission (AUC) serves as the executive/administrative branch or secretariat of the AU (cast in the mould of the European Commission). It is headed by the Chairperson with the help of a number of Commissioners dealing with different areas of policy.

The Commission has its headquarters in the Ethiopian capital, Addis Ababa. It is a different entity from the African Commission on Human and Peoples’ Rights, (based in Banjul, The Gambia), which is a separate body that reports to the African Union.