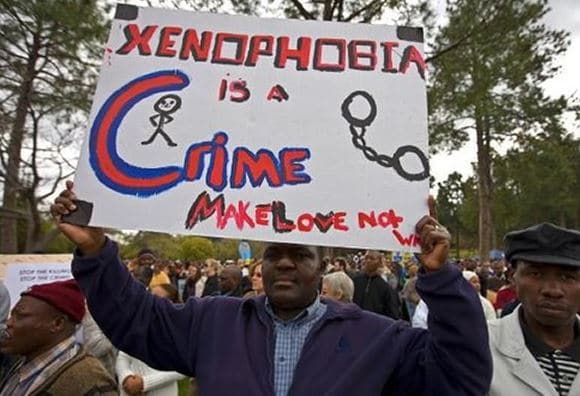 Nigeria`s Consul General in South Africa, Amb. Uche Ajulu-Okeke while visiting Nigerian victims of Xenophobia, has described the recent xenophobic attacks against Nigerians and other foreigners in that country as unfortunate.

“ The Consulate General of Nigeria in South Africa went on a fact finding and  direct field assessment of the xenophobic attack sites.

“ We visited seven locations in Pretoria West. At the first location, a garage, 29 cars, 80 Nigerian passports, welding and painting appliances and  a restaurant were burnt while cash totalling R140, 000(N3.360m) were  removed,” she said.

The envoy said 12 of the damaged cars belonged to South Africans while the rest were being repaired for sale.

“ The garage employed 26 Nigerians and six South Africans and was doing very well,” she said.
Ajulu-Okeke also said a  Nigerian, whose home was attacked,  threw his three children  all  aged below five years over the fence to save them.

“ In the process, one of the kids hit the skull on the floor and is now hospitalised.

“Also, the man disarmed an attacker with a machete but was arrested by the South African police for trying to defend himself,” she stated.

According to her,  the assailants  also attacked a church and stabbed a Nigerian pastor.

The pastor, he said, was  also receiving treatment in  an hospital.

Ajulu-Okeke said  she received information that South Africans were planning to carry-out new attacks on Friday and had sent such messages to foreigners.

She said the information had been reported to the police.

“ I have made a contingency arrangement for Nigerian women and children to be evacuated to the High Commission in Pretoria and the Consulate in Johannesburg.

She said three Nigerians arrested during the attacks had been released following her intervention.