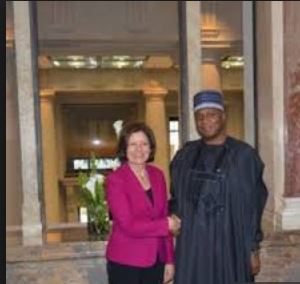 inno.korieMarch 12, 2017 2:04 pm 0
Head of Bundestrat, the upper chamber of the German Parliament, Ms Malu Dreyer, has said that Nigeria as the leading country in Africa must be economically strong and therefore deserved the support of a European giant like her country.
Dreyer who spoke at the weekend while receiving a delegation of the Senate led by its President, Dr. Abubakar Bukola Saraki, in Berlin said Germany attached great importance to the strong relationship with Nigeria and will support the on-going economic recovery programme in the country.
She said the country will look towards extending the special partnership and grassroots co-operation which it presently has with Rwanda to Nigeria and that more exchange programmes between the two countries should be initiated.
The Bundestrat President who has just one year tenure, in line with the country’s federal constitution, promised to raise the request made by Saraki for stronger economic co-operation with the German Chancellor, Angela Merkel and Secretary in charge of Economic Co-operation and Development, Mr. Muller.
“The partnership between Nigeria and Germany is very important and should be nurtured. This partnership at a very high level can help the entire population in  Nigeria.  We have to do all that is necessary to support Africa to prevent internal crisis that would later plague Europe.
“We should empower African nations to enable the people and their government take their fate into their own hands. We have a gain to make from this co-operation. We are faced with refugee situation and to save ourselves the escalation of this problem, we have to tackle the root cause of migration by helping African countries to be economically strong and buoyant. That is why we must help Africa” she said.
In the area of renewable energy, Dreyer said Germany would be ready to help Nigeria through exchange of technical information and exchange programmes as the clean source of power is the future of energy resource in the world and her country had made much progress in the area.
Saraki while responding to the message of his German counterpart reiterated the need for Germany to partner Nigeria in the areas of economic co-operation, security and renewable energy as both are continental leaders whose well being have positive implications for Africa and Europe.
He noted that the Senate delegation was in Berlin to strengthen the existing relationship between both countries as represented by the visit of the German President to Nigeria last year in company with some businessmen.
“We appreciate cordial relationship between Germany and Nigeria. We need German support as our government works hard through progressive policies and legislations aimed at overcoming our current challenges and engaging our youths who form about 70 percent of the population.
“It maybe true that we have economic challenges but the fundamentals remain good and even the prospects are better. That is why we are seriously working to diversify the economy and move away from the dependence on oil. We are moving into agriculture, mining of numerous mineral resources and manufacturing. These areas alongside energy production and funding of key infrastructural projects are areas that German business people can invest in”, he said.
He said power is one area where Nigeria required serious help as its inadequacy affects the success of businesses and limits the productive ability of the people. He urged Germany to provide necessary support to Nigeria through business investment in the sector, provision of technical assistance and sharing of knowledge.
The Senate President added that German support was needed to solve the security crisis in the North-East of Nigeria and that the country was at the point where the displaced people have to be rehabilitated, resettled in rebuilt homes and environment as well as be re-assured that cases of isolated attacks by the insurgents would cease.
The Senate delegation which had visited the Feldheim village where the people are self-sufficient and totally dependent on renewable energy also held talks at the Berlin House of Representatives, the Bundestag and Bundestrat (lower and upper chamber of the German Parliament) and visited the MediaTeam IT Education Centre in Berlin, one of the success stories of Nigerians  living in Germany, the Defence section of the Nigerian Embassy and later had a lunch meeting with Nigerians resident in Germany.