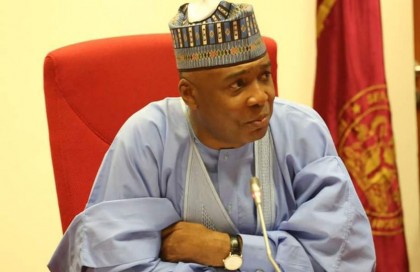 Senate President, Dr. Abubakar Bukola Saraki, on Wednesday, called on leaders of the Economic Community of West African States (ECOWAS), to resist ongoing manipulation of its well intended trade policies by other countries to the detriment of the sub-region.

Saraki who gave the advice in his speech at the opening session of the 2017 First Ordinary Session of ECOWAS Parliament in Abuja, also urged the ECOWAS Parliament to rise up to its billing by using its powers to ensure greater democratization and inclusiveness in the region.

In a statement by his Chief Press Secretary, Sanni Onogu, in Abuja, Saraki insisted that the challenge of insecurity in the subregion can only be surmounted if there is a collective approach by the Community in dealing with the menace.

“Nothing threatens our development today and our match towards a more sustainable democratic sub region like the issue of insecurity,” Saraki said. “The inability of the region to fashion out a clear path for collective sub regional intervention and collaboration scheme militates against and impacts negatively on our region’s ability to feed itself, attract investment and promote tourism. Mitigating this ugly trend must form a vital part of your deliberation in plenary.”

While noting that trade remains the surest way to fight poverty in the region, he urged ECOWAS leaders to remain vigilant to ensure that its regional framework for liberal trade engagement is not misused or usurped to the detriment of the sub region’s internal industrialization and development policy direction.

“What do I mean? A situation where the ECOWAS trade liberalization policy, is manipulated by other countries to channel goods into the subregion in a predatory manner to kill local industries is not the intendment of the policy,” he said. “This is today going on in the area of our agricultural development and we must resist this and ensure that where there is leakage in the trade engagement that enable this practice, it is nipped in the buds.”

According to the Senate President, another issue that requires the urgent attention of the ECOWAS Parliamentarians is illegal migration, saying, “We need to proactively work on remedying the image of the sub region in this regard and join hands with countries like Italy, Germany and Europe as a whole to find solutions to the migration challenge that we have. Continuous dialogue and engagement is important in this regards.”

In the same vein, Saraki while receiving members of the Advocacy Mission of the Task Force on the ECOWAS Trade Liberalization Scheme, led by the former President of Niger Republic, Djibou Salou, urged the committee to work assiduously to ensure that all human and systemic obstacles militating against free trade in the subregion are redressed.

He pledged that the National Assembly will work closely with the task force to achieve the ratification of all pending trade protocols to facilitate the free movement of persons, goods and increased trade in the region.

He urged them to ensure that the liberal trade policies that have been adopted by the governments of the ECOWAS subregion are not exploited by unscrupulous firms to subvert the objectives for which they were put in place.

He stated the increase will bring wealth and reduce poverty among member countries. He insisted that it is unacceptable for the trade volume between West African countries to remain between 10 and 12 per cent annually.