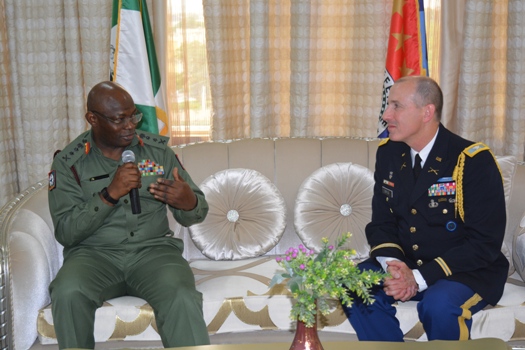 John Enenche, Abuja: The United States Defence Attaché, Colonel Patrick Doyle has reiterated that Nigeria remains one of top priority nations in the world to the United States of America insisting that the relationship between the military of both nations has grown from strength to strength.

Doyle, who was on a farewell visit to the Defence Headquarters (DHQ), Abuja said since his arrival in February 2015, the Nigerian military, has been of immense help in making his stay a successful one.

He particularly was full of praise for the Chief of Defence Staff (CDS), General Abayomi Gabriel Olonisakin who he said his leadership and directives to his personnel provided invaluable support in carrying out his assignment in Nigeria.

He said, “I arrived here in February, 2015 prior to the elections. The relationship between our countries was on the upward swing but got better when you assumed leadership of the military.”

“I will like to thank you for your support to me. This is my second posting to Nigeria; I hope it is not the last as I wish to return again. It has been a pleasure and I appreciate the leadership you gave your staff in supporting me.”

Responding, the CDS who expressed pleasure at welcoming the outgoing Defence Attaché thanked him for facilitating trainings for personnel of the Nigerian Armed Forces.

“You usually get personally involved in making sure such training trips are successful. In the area of platforms, you made sure we received much cooperation. I thank you for all you have done for the Armed Forces of Nigeria,” the CDS said,

General Olonisakin wished Colonel Doyle the best in his future endeavors as he returns to the United States.