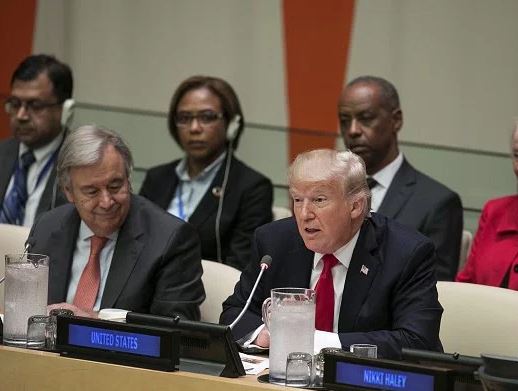 U.S. President Donald Trump will urge other nations at the UN General Assembly on Tuesday to take on a greater role even as he stresses the importance of national sovereignty as part of his “America First” vision.

Trump’s first remarks to the body will be closely watched by the international community eager for insight in the face of threats from North Korea, Islamic State, challenges in Myanmar and Venezuela.

North Korea’s missile tests and bellicose rhetoric have overshadowed the gathering as Trump coordinates with allies, Japan and South Korea, while pressuring China and Russia to do more.

Trump will speak in “extremely tough terms about the North Korean menace and the threat it poses to our security and to all the nations in that room,” a senior administration official said.

More broadly, Trump is focused on promoting peace, prosperity and national sovereignty and accountability during the gathering of world leaders.

“He will urge all states to come together to address grave dangers that threaten us all,” National Security Adviser, HR McMaster said. “If nations meet these challenges, immense opportunity lies before us.”

The “deeply philosophical’’ remarks will outline the U.S.’ role in the world as Trump builds on speeches in Saudi Arabia and Poland this year, in which he called for other nations to do more to confront terrorism and to defend Western civilisation, the senior U.S. official said.

Trump will appeal to each country to use their own nation’s best interest as a basis for international cooperation, the official said.