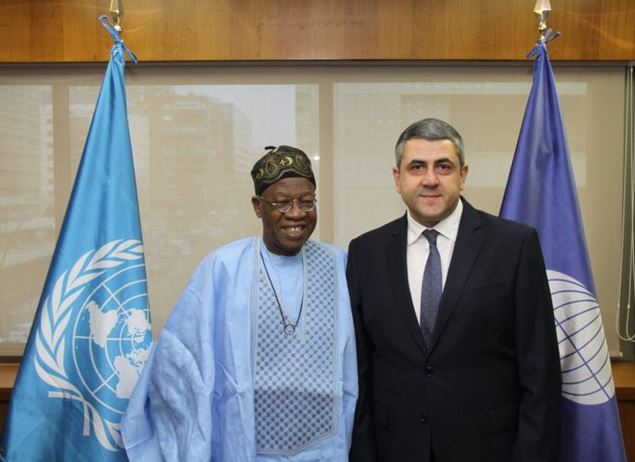 The Federal government has formally extended invitations to African Ministers of  Tourism under the umbrella of the United Nations World Tourism organisation (UNWTO) and African  Commission (CAF) meeting scheduled to hold in Abuja the nation’s capital city from fourth to sixth June this year.

Minister of information and culture Lai Mohammed personally extended the  Invitation to the ministers at a meeting held on the sidelines of the ongoing international travel Trade fair in Berlin, Germany on Thursday.

The Minister of Information and Culture, Alhaji Lai Mohammed, has guaranteed African Tourism Ministers of the best experience of Nigeria’s creative industry as the nation prepares to host them in June.

A statement issued on the meeting of the Ministers in Berlin was made available to newsmen in Abuja by Mr Segun Adeyemi, the Special Adviser to the Nigerian Minister.

According to the statement, Mohammed personally extended the invitation to the ministers, assuring them that they would experience the best in the area of the Creative Industry, where Nigeria’s competitive advantage is widely acknowledged.

“I have sent an email to every Minister, reminding them of the meeting and assuring them that we will leave no stone unturned to host a very successful meeting.

”The truth is that no matter the level of preparation that is made, if you are not there, it is not a success.

“So, I really wish to appeal to all of us to please attend the CAF meeting in June,” the Minister said, shortly after handing over the invitation letters to his African colleagues.

The minister also has urged the global tourism body, UNWTO, to involve African Heads of State in its plan to rebrand the continent and make it more attractive to global tourists.

Contributing to the debate on the UNWTO’s  rebranding process for Africa in Berlin, he said Ministers other than those of tourism should also be involved.

”The UNWTO could make Presidents and Heads of State from across Africa honorary Champions of Tourism as a way to get them involved.

“There could also be a forum where UNWTO will invite other ministers, including those of Finance, Budget and Planning, Health, Interior, Foreign Affairs, Infrastructure and Agriculture.”

The minister urged his colleagues to come and hear firsthand information on how tourism impacted their various portfolio.

”Tourism is the barometer through which the world will feel the temperature of any country.

“There is no area of governance that is left untouched by tourism.”