Nigeria has again called on nuclear-armed States for the total elimination of their nuclear weapons, saying they are “inhumane weapons”. 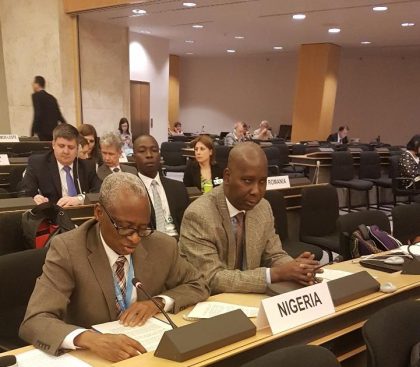 Amb. Kadiri Audu, Nigeria’s Permanent Representative to the UN Offices in Geneva, made the call while delivering Nigeria’s statement at the General Debate in Geneva.

The debate was on the Second Preparatory Meeting of the 2020 Review Conference of the Parties to the Treaty of the Non-Proliferation (NPT) of Nuclear Weapons.

The Nigerian envoy said: “Our world is not safer today than it was yesterday. Nuclear weapons remain a major threat to humanity and to global peaceful co-existence.

“From the threats posed by the early generations of atomic bombs, we are now faced with a collection of modern, and far more powerful lethal weapons, whose detonation could spell doom for our entire planet.

“Nigeria considers the current and existential threat of nuclear weapons unacceptable. As States Parties, it is our obligation to work concertedly to avert the catastrophic consequences of their possible use or threat of use.

“As a result, we must not allow this auspicious conference pass into history without targeted outcomes. We must seize the opportunity it offers to reaffirm our commitment to the NPT”.

According to him, NPT is a pivotal instrument for ultimately achieving the global collective resolve to eliminate nuclear weapons from the arsenal of States.

Nigeria reaffirmed its support for the goal of general and complete disarmament, saying we believe that nuclear disarmament and non-proliferation are mutually reinforcing.

Kadiri said nuclear disarmament remained the only effective path to non-proliferation, pointing out Nigeria’s unrelenting commitment to a nuclear-free world by its ratification of several non-proliferation protocols.

These are the 1997 model additional protocol, the safeguards agreements with the International Atomic Energy Agency, the entry into force of the Treaty of Pelindaba, and as a co-sponsor of the de-alerting resolution.

“It is imperative that Non-nuclear weapons states are assured against the threat or impact of the deployment of nuclear weapons under a legally binding framework.

“To preserve the mutual trust necessary to safeguard existing assurances, the moratorium on nuclear testing should be maintained.

“In addition, we support the growing focus on the humanitarian consequences of the use of nuclear weapons,” the Nigerian envoy said.

Nigeria said it continued to welcome any gesture by nuclear-armed States to reduce their stockpile adding, however, its highest expectation is for these States to wholly eliminate their nuclear arsenals.

He encouraged states not yet party to the NPT to cease developing and testing these weapons of mass destruction, while also welcoming the growing diplomatic initiatives on the Korean Peninsula.

The Nigerian Permanent Representative said: “The African Nuclear Weapons Free Zone Treaty (Treaty of PELINDABA) continues to consolidate on the objective for its establishment.

“Besides promoting the Pelindaba Treaty, Nigeria fully supports the establishment of free zones across all regions, including in the Middle East.

“We are conscious that no nation is safe in the event of a successful act of nuclear terrorism. In this regard, Nigeria remains a constructive supporter of all efforts to promote Nuclear Security”.

Kadiri reaffirmed Nigeria’s strong commitment to meeting its obligations under the treaty, and pledged his delegation’s preparedness to engage constructively in the course of this conference. (NAN)