The Minister of Information and Culture, Alhaji Lai Mohammed, has said that the U.S. President Donald Trump’s invitation to President Muhammadu Buhari is a proof of the cordial relations between the two countries. 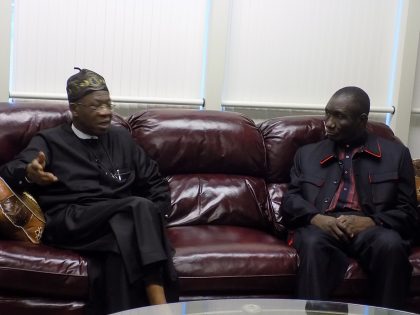 Mohammed told the Correspondent of the News Agency of Nigeria (NAN) in New York during his engagements with media and a couple of think-tank in the U.S.

The Minister is in the U.S. to showcase some of the achievements of the Buhari’s administration to the U.S. and the world.

He said: “I think it would be presumptuous to really know or say what he (Trump) is going to discuss with Mr President (Buhari).

“But clearly, that he (Buhari) is being invited by President Trump shows the growing cooperation between the U.S. and Nigeria and I think it portends well for both countries”.

Trump is due to host Buhari on Monday, April 30, at the White House to discuss issues including “fighting terrorism” and economic growth.

“President Trump looks forward to discussing ways to enhance our strategic partnership and advance our shared priorities: promoting economic growth and reforms, fighting terrorism and other threats to peace and security, and building on Nigeria’s role as a democratic leader in the region.

“The relationship of the United States with Nigeria is deep and strong, and Nigeria’s economic growth, security, and leadership in Africa will advance our mutual prosperity,” the White House had said.

NAN reports that Buhari would be the first African leader that Trump would host at the White House since his inauguration on Jan. 20, 2017.

NAN also recalls that the Nigerian president was the first African leader Trump called on phone following his inauguration as the U.S. president.

Diplomatic experts said the developments have only reaffirmed the strategic importance of the Nigeria-U.S. bilateral relations and Nigeria’s strategic position in Africa.

NAN also recalls that former U.S. Secretary of State Rex Tillerson also visited Nigeria in February in a first five-country African tour embarked upon by any official of the administration. (NAN)