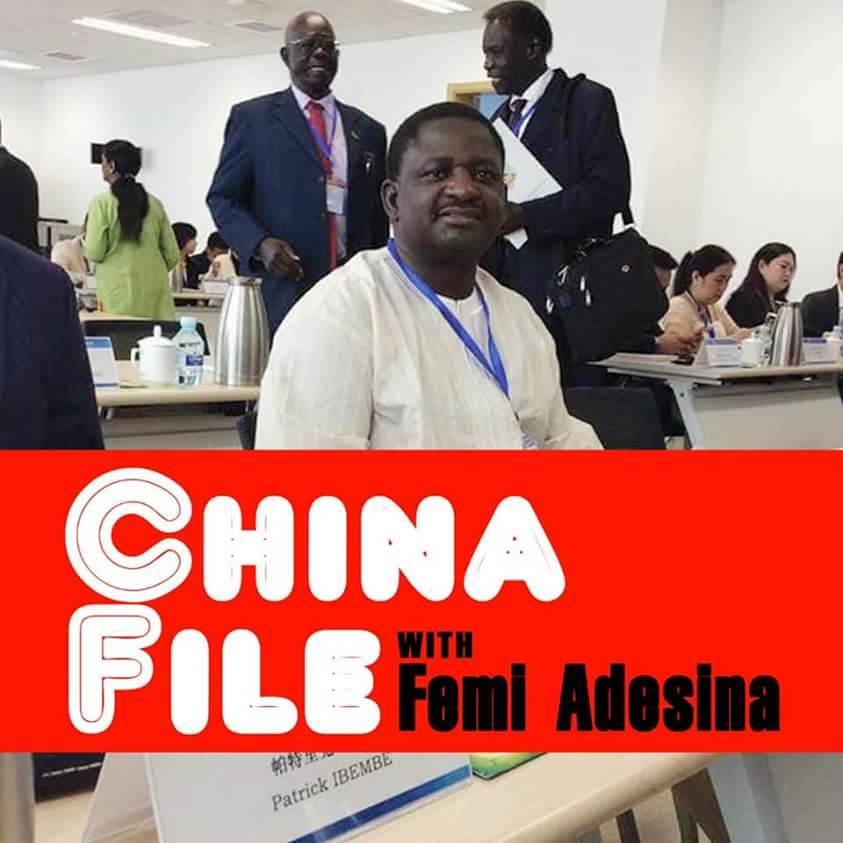 SIMILITUDES BETWEEN NIGERIA AND CHINA

On Wednesday, May 30, 2018, I slipped out of Nigeria. Where to? Beijing, in China, to attend an international seminar on National Governance for Presidential Advisers from Developing Countries.

The two weeks seminar is under the auspices of the Graduate School of the University of Chinese Academy of Social Sciences, in collaboration with the country’s Ministry of Commerce.

Ethiopian Airlines was the giant bird that ferried us on its wings, first to Addis Ababa, where we had about four hours stopover, and then to Beijing. Total flying time was about 15 hours.

What do you do when such giant bird propels you through the air at almost dizzying speed? Forget all worries. Hand yourself to the divine powers. Eat. Sleep. Wake. Read. And sleep again. Life should be one long holiday, shouldn’t it? But then, too much sunshine makes a desert. Too much leisure can also be boring at the end of the day.

We landed in Beijing at about 5 p.m, Thursday (which was 10 a.m Nigerian time). I cleared Immigration, went through Customs, and exited from the airport. I was to be met by the organizers of the seminar, who would have my name displayed on a large piece of paper. I scanned all the names held aloft, none resembled mine. Or did they write it in Chinese?
I was still wondering, when a smart young man, possibly in his late teens or early twenties walked to me. He was obviously Nigerian.

Are you Mr Femi Adesina?

I answered in the affirmative. He greeted me warmly, introducing himself as Ibrahim Bala, from Kano, in Nigeria, and a final year engineering student in Beijing. He had been following me on both social and traditional media, and requested for photographs. I gladly obliged.
Ibrahim is obviously the face of the future Nigeria. Engaging, bright, good conversationalist, bold. He knew what he wanted, and went for it.

Done with pictures, I told him my dilemma. He whipped out his phone, and called the number on the invitation letter I’d been armed with from Nigeria. In a matter of minutes, two ladies showed up. One was Nancy, the other, Joy. They were to have been on hand to receive me, and apologized profusely. It turned out that the flight had landed about 30 minutes ahead of scheduled time. Talk of wind assisted flight. May the tail wind always assist you positively in the voyage of life. Amen, somebody!

The seminar kicked off on Friday. There were delegates from at least 12 countries, across four continents: Nigeria, Republic of South Sudan, Uganda, Liberia, Serbia, Philippines, Ghana, Mauritius, Peru, Laos, Surinam, and Sri Lanka.Some countries had up to five representatives. But I was the only one from good, old Nigeria.

The faculty was made of many professors, and other eggheads. The first friendship I struck was with Hon. Aggrey Tisa Sabuni, the Adviser on Economic Affairs to the President of South Sudan. When he heard that I was Adviser to the Nigerian President on Media and Publicity, he declared: “Oh, your job must be very tough. You are the shock absorber. When they can’t reach the Big Man himself, they will take it out on you. They come after you. Tough job. Same as mine. Everything about the economy in my country, I get all the blame.”

You would think Sabuni lived with us in Nigeria. He got the antics of people we call the wailing wailers perfectly. When you can’t get to the boss, take it out on his aides. Cry and shout as if the world was coming to an end, over the flimsiest of all matters. Call the aides names, use foul words, abuse their father and mother at the same time.

In his remarks at the opening ceremony, Sabuni said something which I considered spot-on: “This seminar has identified a badly needed ingredient in the developmental agenda of developing countries. It calls for the establishment and maintenance of strong institutions which in turn are able to plan and implement projects effectively and efficiently. Institutions that are able to safeguard transparency, accountability, and integrity in the management of public affairs and resources for the common good.”

I agree. That is what President Muhammadu Buhari is trying to engender in Nigeria. And we will get there.
An eye opening presentation was made by Prof Huang Xiaoyong, President, Graduate School of Chinese Academy of Social Sciences. Topic was ‘The History and Outlook of China’s Economic Development.’ And by the time he surfed through history, you would think pre-1978 China was Nigeria of recent times.

The global power that is today China was nowhere remarkable till the late 1970s. It was a developing country as any other, far behind Europe and America, till the leadership caught a new vision, and launched the country out of the morass in which it was marooned.

From 1949, when the modern China emerged, till 1978, it was like wandering in the wilderness. The economic foundation was weak. Progress was slow. The economy could not stimulate the initiative of the workforce, and failed to improve their standard of living significantly. There was no electricity, no water conservation and irrigation, transportation was mainly by rafts, the country was barely able to feed its massive population. This must surely remind you of our own dear native land. Nigeria we hail thee!

But then, the paradigm began to shift from 1978. In fact, 2018 marks the 40th year of the Chinese miracle, when the country began to turnaround. Nigeria, too, is turning, and one day, our children will mark the 40th anniversary of that turn, championed by President Muhammadu Buhari.
What did China do? It changed its development model to one driven by reforms, and opened up to socialist economic path with Chinese characteristics. And the result? The country has today moved from rafts to high speed train and home grown aviation. National income has increased 155 times. Grains output, which was 0.3 billion tons in 1978 had increased to 0.6 billion tons last year, thus guaranteeing food security for its over one billion population. Electricity, which was spasmodic, is now taken for granted, with a combination of hydro, fuel coal, gas, nuclear, renewable energy, and other forms. According to Prof Xiaoyong, China today has total stock of electricity higher than Europe put together.

Again, there is social welfare/medical care cover for all elderly in both rural and urban areas. And many more…
How did China get there? How did it tread the road which Nigeria has just ventured into in the Buhari years, after decades of waste and official corruption?

From being a closed society, China opened up. It established diplomatic relations with the US in 1979. It won the bid for the Olympics in 2001, which it successfully hosted in 2008. It entered the World Trade Organization (WTO) in 2001, thus opening up its industries. The ruling party, CPC, formulated what it called Readjusting, Restructuring, Consolidation and Improving China’s economy. Deng Xiaoping, the then President said revolution means the liberation of production, stressing that the essence of socialism is to liberate the productive forces, eliminate exploitation, eliminate polarization and ultimately achieve common prosperity.

Between 1997 and 2007, China’s economy had entered a new phase of balanced development, while conquering the Asian financial crisis.

The initial turnaround took at least two decades, before the Eldorado of today. That is the same thing some people want done in three years in Nigeria, and had begun to wail endlessly that they were hungry, when their kitchens were virtually being restocked. Some other people are seated in judgment, asking the horse rider leading Nigeria to Canaan, a land flowing with milk and honey, to dismount in 2019. How did China keep the wailers quiet, both on the political and civil fronts?

“Financing reforms was a huge challenge,” said Prof Xiaoyong. “We had people living overseas, who were very wealthy. We encouraged them to bring foreign capital home, and because they had emotional attachment to motherland, they complied. We gave preferential taxation, exemptions, and so on. Foreign investors became enthusiastic, and came.

“Political stability was also very good. Without it, we could not have achieved what we did. China has its own model of democracy. The political parties must have a shared vision of the country, and the people must have a voice in shaping the future of the country.”

Shared vision of the country. Very much lacking in Nigeria. A government amasses foreign reserves as Umaru Yar’Adua did, the next one squanders it. The reserves are being built again, but may we never return to Egypt. Amen.

China had to retire politicians who didn’t share the vision of economic development. Nigeria must also do so in 2019, so that the current vision can be sustained for a better future.

See some other things China has achieved in 40 years. GDP increased from RMB 364.5 billion in 1978 to 72.2047 trillion yuan in 2016. In 1978, China ranked 10th in terms of GDP, today it is second, following the USA.
GDP per capita increased 10 times, with an annual growth of 10.1%. The country can feed over 1.3 billion people on its own. Nigeria has a GDP growth target of 7% by 2020, and has almost attained food self-sufficiency in three years of the Buhari administration. Who says the Chinese miracle is not possible with us? It is, and no mistake.
China is today number one in Manufacturing, Industry, Commodity Trade, and Foreign Currency Reserve. All in 40 years. Nigeria can also get there, as long as we shut the door firmly against the rapacious suckers of the nectars of office.

Today, President Xi Jinping is building on the achievements of his forebears. With the development of the country’s marketization and open door policy, China is working on promoting economic globalization, spreading prosperity round the world. Happily, Nigeria is on the positive side of that trend.

Let me end on a lighter note. Since I got here, I’ve been eating mainly rice and vegetables. Why? That is what I know and I am familiar with on the menu.
The comedian, Gbenga Adeyinka the 1st cracked a joke sometime ago, which keeps ringing in my ears, though it’s not my first time in China.

He didn’t know what shakuku was, but he must eat everything. His plate was piled high, and he dug into the meal, till he undermined the foundation. His stomach became rotund, and he belched noisily. At least, it was free food by the organizers of the party.

The lesson? Always eat what you know. The race track is where to show your fleet-footedness, not between the living room and the small room.