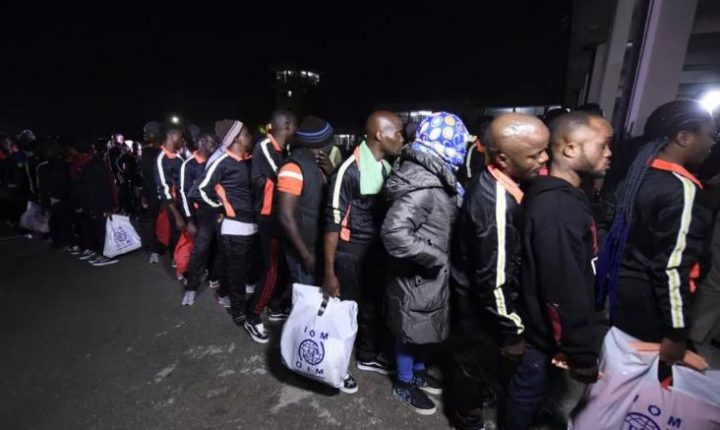 The National Emergency Management Agency (NEMA) on Friday said no fewer than 643 Nigerians voluntarily returned from Libya in the last five weeks.

The Director-General of NEMA, Alhaji Mustapha Maihajja, made the disclosure while receiving a new batch of 166 returnees who arrived in Lagos on Thursday night.

Maihajja, represented by the South West Zonal Coordinator of NEMA, Alhaji Yakubu Suleiman, said the Nigerians were assisted back by the International Organisation for Migration (IOM).

According to him, the returnees arrived at the Cargo Wing of the Murtala Muhammed International Airport, Lagos at 10.50 p.m. on Thursday night aboard a Libyan airline with registration number 5A-DMG.

Maihajja advised parents and guardians to desist from encouraging their children and wards from embarking on the journey that will end up derailed the promising futures of the victims of trafficking.

The NEMA boss said the appeal was due to the testimonies and confessions of the returnees and confirmations by most of the families that the victims came from.

Maihajja pointed out that the intended countries of destinations were no longer ready to accommodate migrants due to several socio-economic and security factors.

“There are unconfirmed reports of emerging trends of alleged human organ harvesting from irregular migrants who are alleged to be sold to harvesters.

“If these developments are real, then we must discourage irregular migrations in whatever forms,” he said.

Maihajja emphasised that discouraging irregular migration and human smuggling could only be achieved by government and development partners with the full cooperation of the parents and guardians.

According to him, there is also the need to continuously create awareness and sensitise youths on dangers and evils of human trafficking.

He reiterated that the Federal Government would not relent in its efforts at creating a conducive environment for every Nigerian to maximise his or her potentials in the progress and development of the nation.

NEWER POSTBuhari to Addresses UN General Assembly September 25
OLDER POST“God Will Fish out The Bad Eggs Among Us”, President Buhari to Supporters in Bauchi