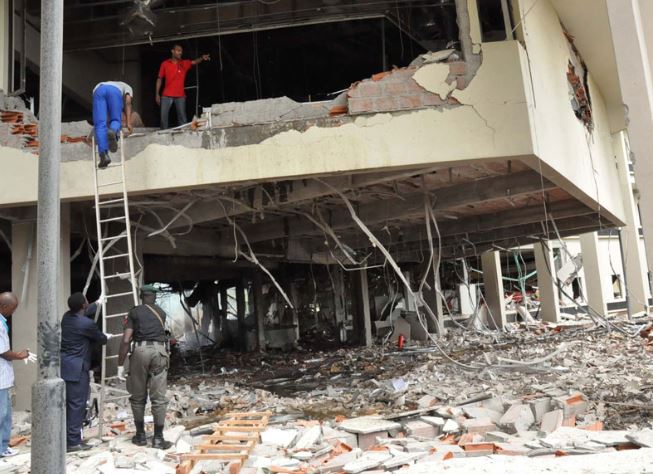 Seven years after the UN building in Abuja was hit by insurgents in which 21 persons died, the reconstruction of the building has been shrouded in controversy.

The building, located in the Central Business District of the Federal Capital Territory, Abuja, is home to all the UN agencies in Nigeria, many of which are still operating from different locations since the Aug. 26, 2011 attack.

On that day, at about 11 a.m., a car loaded with explosives broke through two security barriers and a driver detonated the bomb after crashing it into the UN reception area.

The bomb caused devastation to the building’s lower floors which is the headquarters for about 400 UN employees.

The then Minister of State for Foreign Affairs Viola Onwuliri described the attack as “not attack on Nigeria but on the global community; an attack on the world.’’

Also, the then UN Secretary-General Ban Ki-moon, described the attack as an “assault on those who devote themselves to helping others.”

Shortly after the attack, the Federal Government promised that it would renovate and reconstruct the building within the period of six months after the incident.

Similarly, four years after the bombing, the Federal Capital Territory Administration (FCTA), reassured Ban, who was on a visit to Nigeria that the Federal Government would hand over the renovated UN building as promised.

Corroborating the Federal Government’s promise, Mr. John Chukwu, the Permanent Secretary, FCTA, said that the UN had sorted out all grey areas at meetings with UN experts.

Further to this, in 2017, while signing FCTA/UN 2017 Annual Work Plan, FCT Minister Muhammad Bello, also promised to complete the reconstruction and hand over the building before the next anniversary of the UN.

Bello, who described the signing ceremony as a very important milestone in the relationship between the FCTA and the UN, said that speedy reconstruction of the building would be recognition of the UN commitment to doing good works in the FCT.

He promised that adequate budgetary provisions would be made in the 2017 budget to accelerate the realisation of set targets and bridge the deficiency gaps in performance in the previous years.

He said that the Federal Government also approved N6, 972, 986, 898 billion for the contract for the provision of security equipment and associated infrastructure, including furnishing for UN building.

“The UN building was bombed in August 2011 by terrorists that almost destroyed the entire building as well as led to the loss of lives.

“At that time, as part of Nigeria’s commitment to the ideals of UN and the support and also as reciprocation of what the UN has done for this country over the years, the government decided to reconstruct the UN building,’’ he said.

He said that the contract was awarded to the main contractor that constructed the building — Julius Berger Nigeria Plc.

According to him, the scope of the contract is to provide the latest level of security parameter fencing that is capable of withstanding bomb blast as well as fortifying gates to the highest international standards.

He explained that it would also include the creation of three police posts including the installations of body scanners, baggage scanners as well as the installation of closed-circuit television across the internal and external portions of the building.

“So all these will be done within a period of 13 months, hopefully by which time the UN will move to its office, the agencies in it will be able to operate from one location under fortified security that is up to the standard that the UN is used to,’’ he stated.

However, on June 20, President Muhammadu Buhari while signing the 2018 budget noted that lawmakers made cuts amounting to N347 billion in the allocations to 4,700 projects he submitted for consideration.

Buhari who expressed his displeasure said that the cut would make it impossible for the Federal Government to fulfill its commitment to the UN on the project.

But Mr. Tony Odigie, Director, Public Building, Federal Capital Development Authority, said that what remained in the building was the installation of security apparatus.

He said the contractor –Julius Berger Nigeria Plc. — has already moved into the site for the contract for the provision of security equipment and associated infrastructure, including furnishing for the building.

Odigie promised that FCDA was going “compress’’ the work, in order to meet the deadline.

Observers note that for almost seven years after the killing of some people and destruction of the building, the staff members of the UN have been operating in rented buildings Abuja.

They, therefore, call for urgent attention on the speedy completion of the building.