The UN Entity for Gender Equality and the Empowerment of Women (UN Women), on Tuesday urged traditional leaders to protect the girl-child from child marriage and female genital mutilation (FGM). 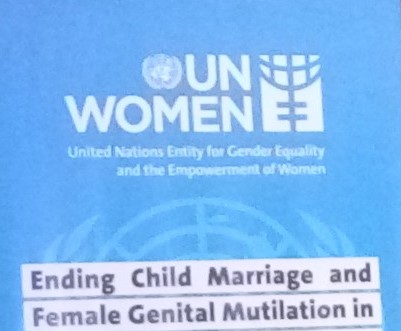 Dr Mary Okumu, the UN Women Country Representative to Sierra Leone, made the appeal at the ongoing 2018 UN Women Conference in Lagos.

The News Agency of Nigeria (NAN) reports that the four-day conference has as its theme: ‘Ending Child Marriage and Female Genital Mutilation in Africa: Dialogue with Traditional and Cultural Leaders’.

Okumu said that over 120 million women and girls in Africa had experience female genital mutilation and child marriage.

She said that the statistics had made female genital mutilation and child marriage epidemic in Africa.

“These abuses against the girl-child and women call for concern and should be stopped to make Africa a safe place.

“These practices have negative impact. Some girls who are married off early experience pregnancy complications and some even die because their bodies were not mature to have babies.

“’Some girls who go through female genital mutilation also bleed to death in many cases.

“The traumatic experiences happened where proper education, gainful employment, the health and the well-being of the girl-child are compromised.’’

She said that the UN had regarded these practices as an abuse and decided to dialogue with traditional and cultural leaders as community gatekeepers on how to stop them.

“We are urging the traditional leaders and all concerned to be protectors of our children against  harmful practices in order to transform the lives of the girl-child and build a great Africa,” Okumu said.

Also speaking, the Obi of Onitsha, Igwe Nnaemaka Ugochukwu, said tradition and culture were dynamic and should be applied for the benefits of the people and not to harm them.

“We are in the 21st Century and we cannot allow our culture to take us back.

“We need to work together as a nation, and as a continent to end the scourge so that we can move with the rest of the world,” he said.

The representative of young girls, Miss Maryam Ahmed, said that only four percent of the girls in Africa were attending schools.

Ahmed said that the rest were being married off to take up the role of motherhood unprepared.

She said that female genital mutilation and child marriage would always have long-term detrimental effects on the health, education, and future of the girl-child.

“We, the girls in Nigeria and in Africa at large; are appealing to our parents, traditional leaders, and governments to prioritise our education and empower us to reach our potential.

‘“There is nothing more powerful than a girl with ‘A Book’.

“We have a right to be educated, to be heard and consulted; please, stand up for the girl-child, dear nation,” she said. (NAN)