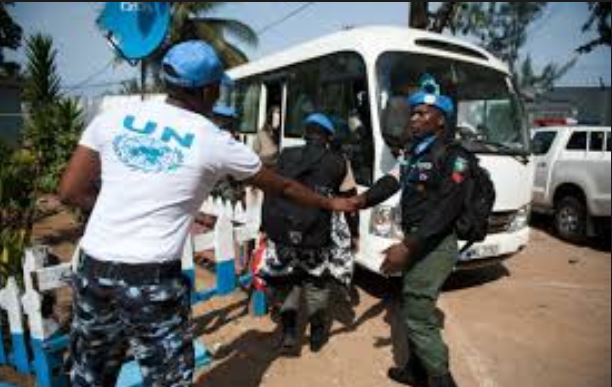 The last batch of 108 Nigerian Formed Police Unit (FPU) deployed to Liberia under the UN Mission in Liberia (UNMIL) have withdrawn after five years following the conclusion of their mission.

The batch of 200 Nigerian peacekeepers had also withdrawn from Liberia in February as part of the termination of the mission’s mandate, scheduled on March 30, the mission said.

“The Nigerian contingent has been deployed in Liberia since UNMIL was first established in 2003. Nigeria has been a main contributor of military and police to UNMIL.

“The UNMIL has been a steadfast partner to Liberia for the last 15 years.

“It has supported security and security sector reform, rule of law, efforts to disarm, human rights and sustainable peace.

“The Mission will complete its mandate on March 30.

“UNMIL was established in September 2003 with 16,475 uniformed personnel to monitor a ceasefire agreement in Liberia, following the conclusion of the Second Liberian Civil War”.

An official farewell ceremony was held in February in honour of the last departing 689 uniformed personnel – 404 military and 285 police personnel – who had served with the Mission.

This symbolised the end of UNMIL’s military and police operations in Liberia, more than 14 years after UNMIL was deployed in compliance with Security Council resolution 1509 (2003).

Nigeria’s Maj.-Gen. Salihu Uba is the Force Commander and Head of  UNMIL’s Military component of men and women from various countries including: Nigeria, Pakistan and Ukraine.

Uba was Commander of the Training and Doctrine Command of the Nigerian Army before his appointment as the Force Commander for UNMIL by the former UN Secretary-General Ban Ki-moon on Jan. 9, 2015.

The Formed Police Unit composed of Nigerian and Chinese personnel and since 2003, 61 contingents from various countries had served in Liberia, UNMIL said.

According to Uba, the mission’s uniform component military and police have taken greater stride towards strengthening peace and security, rule of law, governance among others in Liberia.

The Force Commander stated that it was not all roses particularly for the military which had the highest fatalities of 138 personnel while the police lost 21 persons.