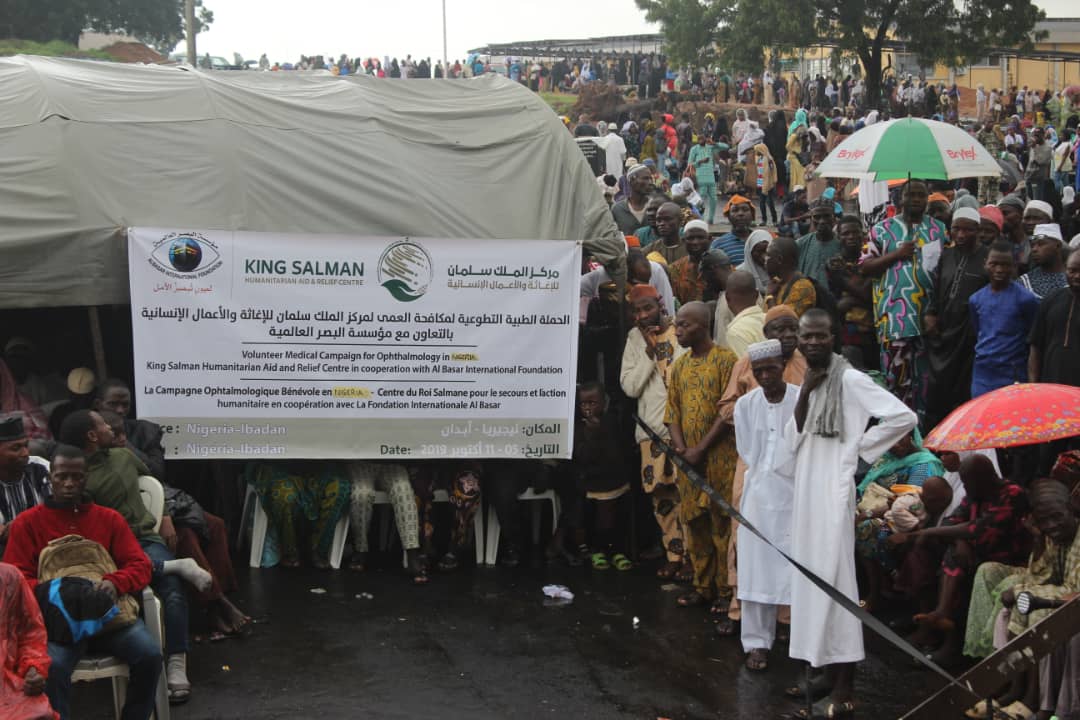 The Kingdom of Saudi Arabia, yesterday, Saturday, October 5, 2019, launched its Volunteer Medical Campaign for Combating Blindness and its Causes in Nigeria to combat eye problems and treat eye patients.

The campaign is funded by King Salman Humanitarian Aid and Relief Center in collaboration with Al Basar International Foundation.

This is in order to contribute to treating eye patients and combating eye problems in the Nigerian society.

The campaign’s first stage comprises of eye patients in Ibadan ( Oyo State), and in Lafiya (Nasarawa State), and it is coordinated with the local government authorities in the states.The campaign will continue until the end of October, the current month.

The campaign aims at detecting and diagnosing the problems of eye patients by consultants and surgeons in order to give them the necessary treatment and to do surgery to remove cataract and glaucoma for those in need of the surgery, as well as do other minor surgical operations and offer them medicine and medical glasses.

More than twenty (20) persons work in this campaign, comprising of consultants, technicians assistants, and a number of volunteers.

On the first day of the campaign, a great number of Nigerian citizens who came to the campaign’s post in the city of Ibadan were actually examined and diagnosed. Most of them were found to have sight weakness or disorders, and the necessary treatment was given to them. The approval has also been made to perform five hundred (500) surgical operations in the coming days in order to remove cataract and glaucoma.

This campaign proceeds from the leading humanitarian role of the Kingdom of Saudi Arabia in terms of humanitarian and relief aid in various countries of the world, as well as the interest of the Custodian of the Two Holy Mosques, King Salman bin Abdul-Aziz Al-Saud, and his trustworthy Crown Prince, Muhammad bin Salman, in enhancing humanitarian work in all fields and in offering aid to friendly countries.

The Kingdom of Saudi Arabia also offers its humanitarian aid to all humanity, irrespective of religion, race or color.

This campain comes in order to enhance and strengthen the excellent historical ties between the Federal Republic of Nigeria and the Kingdom of Saudi Arabia, which are based on friendliness and mutual cooperation.